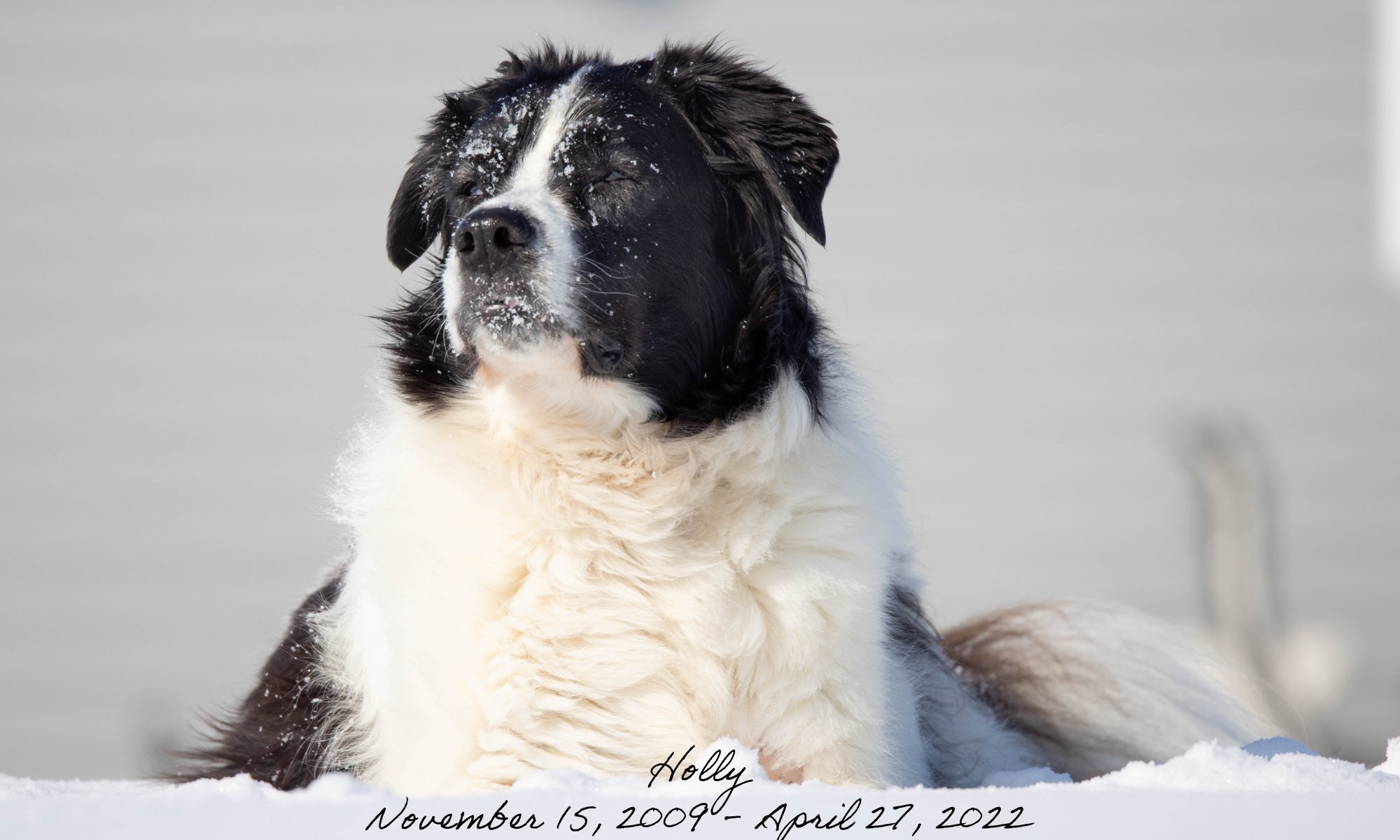 THE decision is never easy.  But often it is clear.  This time it was neither.

It's never easy to say good bye to your pet, your friend and family member.  When you adopt (rescue or purchase), you are committing to caring for him/her for their forever.  To love them unconditionally, feed them, give them shelter, health care, and keep them safe.

At least that's how it works in my world.  Sometimes humans miss that particular memo when they decide it's time to add a pet to the family - but that's a whole different story and article.

I think given my rules above, it's normal then to feel like a failure when the life of your cherished animal is over.   Like somehow I failed keeping them safe.   Like somehow I should have done more, fixed them better, loved them more.   Somehow deep in the soul it feels like if I had loved them enough, they wouldn't have left.

But that's not how it works in my world either.

When I chose to open my heart, I knew there would be destruction later.  It's a given.  And sometimes it IS easier to just close off the heart and not feel the inevitable pain.  Easier but so much emptier.

During the depth of the pain, it's sometimes hard to remember.

Time to Add to the Family

12.5 years ago, I decided it was time to add to my family.   My family consisted of a Labrador retriever that was going blind from PRA and my giant Newfoundland.

I searched on pet finder for another Newfoundland and found her! 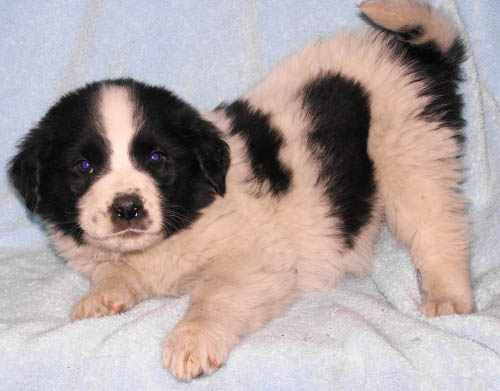 She was listed as a Springer Spaniel, Newfoundland, St. Bernard mix.   I took one look at this spunky girls picture and knew she was the one for me.

About a 5 hour drive to East St Louis to meet my little Goddess at her foster home.   She was so tiny. 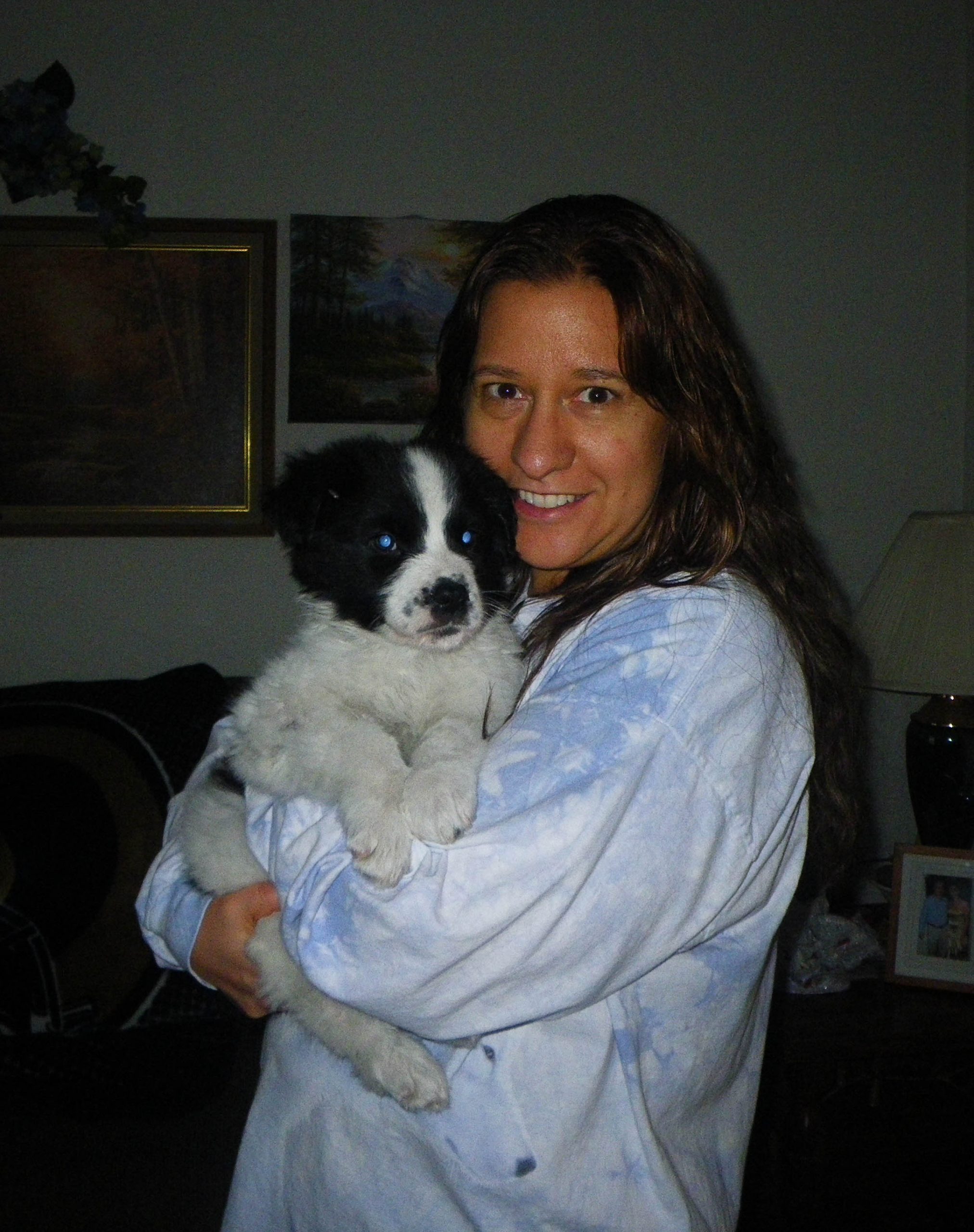 Holly certainly was a spunky girl.    She caused all sorts of problems with her big brothers - her whole tiny body was smaller than Shadow's head!   And when he had enough of her, he'd just put his head on her and squish her (in an ever so loving way). 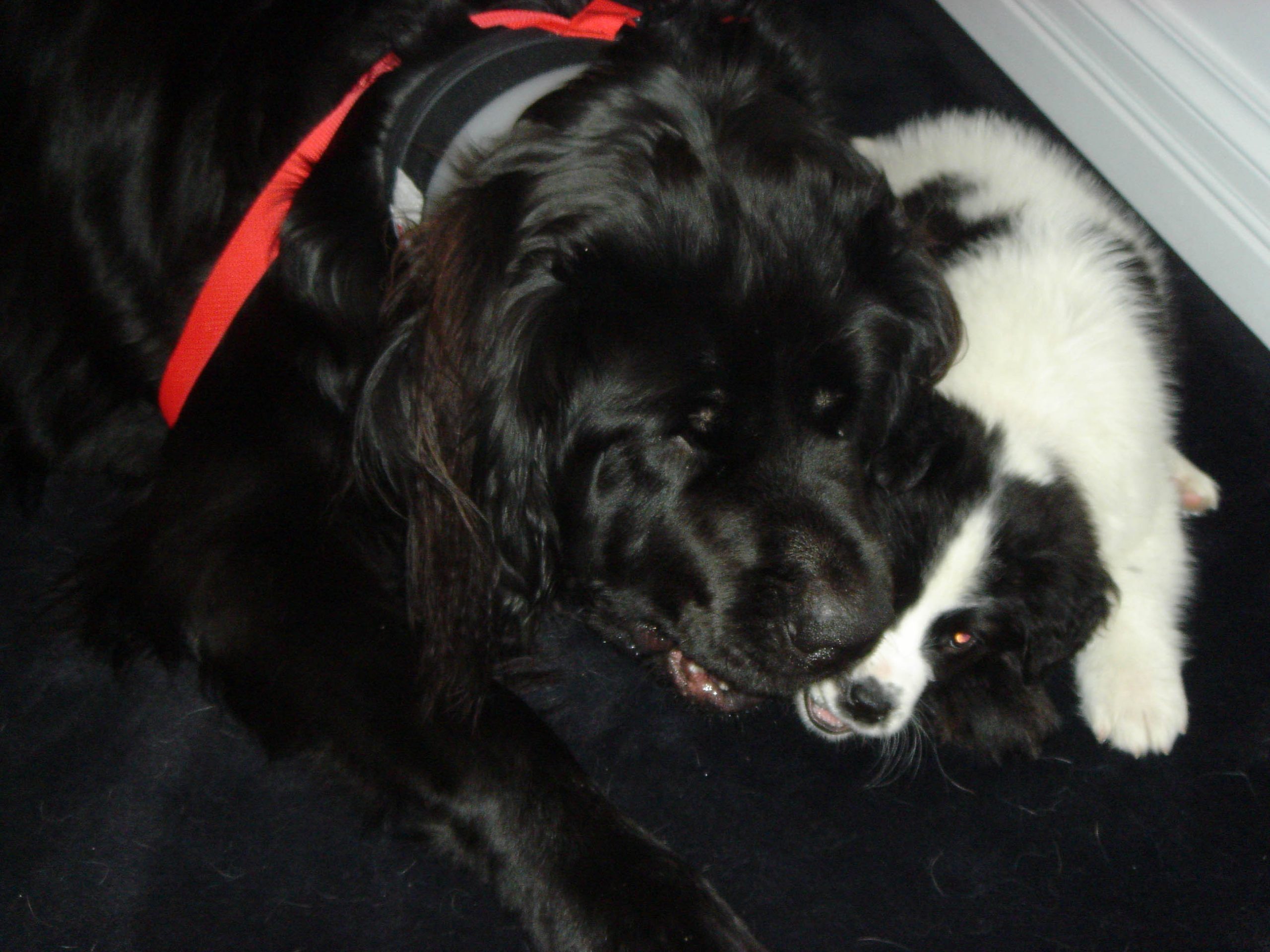 I adopted her in January and we spent many hours at dawn outside in the freezing cold waiting for her to go potty.   She learned quickly that if she went potty - we'd go inside - so she'd just go running around and play and play so she didn't have to go back inside.  My spunky girlie, my Minnie Moo. 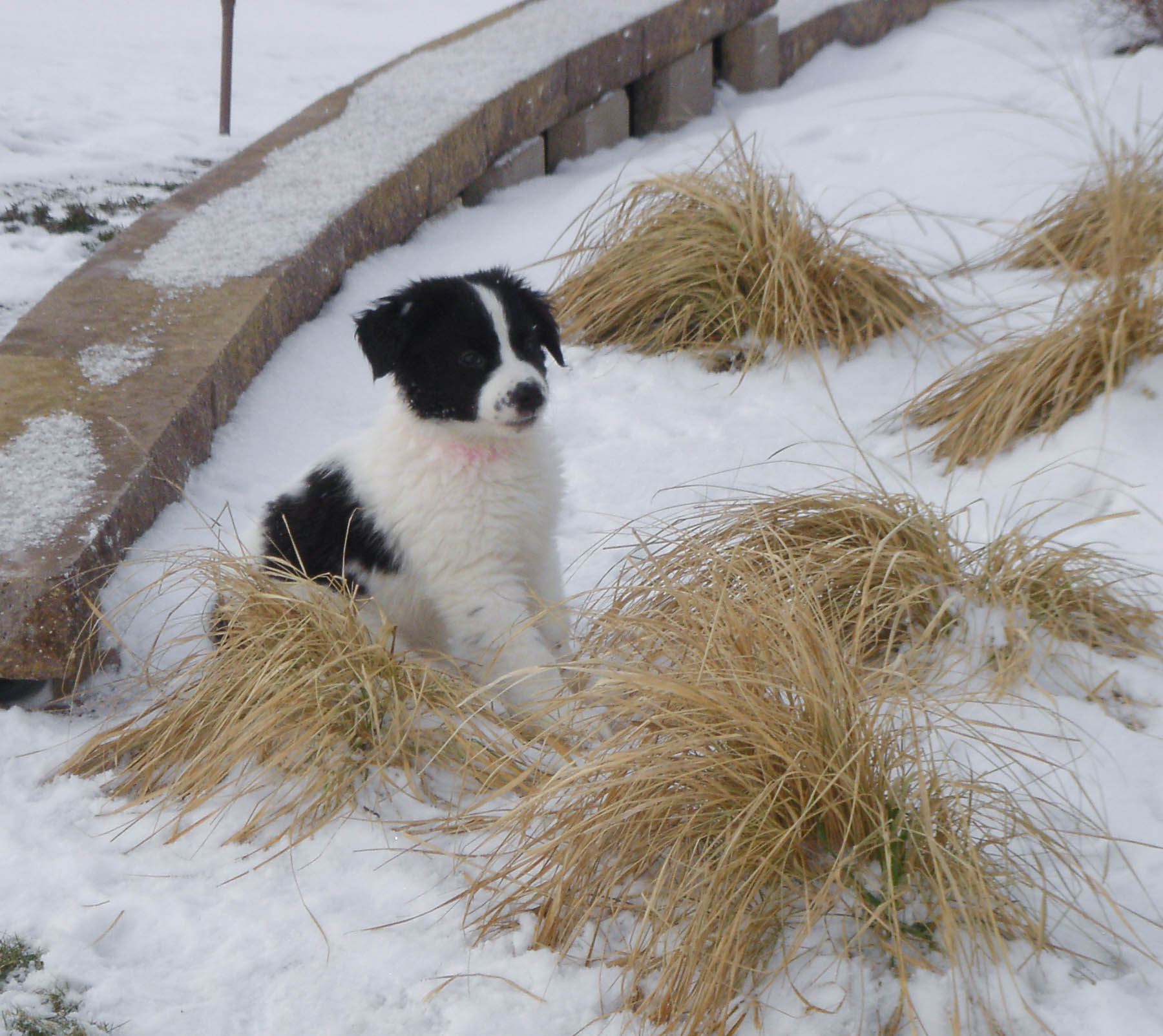 She grew up really fast and I started wondering about her pedigree.   She hated water - wouldn't even step in a puddle and loved to run the fence line.   She had very pronounced dew claws so I thought maybe she had some Great Pyrenees - but I'll never know.

Holly liked to pretend she was the alpha dog in the house.   To any casual observer, they would have thought for sure she was...but when she got scared, even as an adult, she would run and hide behind Shadow.    She would always defer to him - he just never demanded much.

She loved going to daycare and playing with all the other dogs.   She loved being at home.   She loved her doggie beds.   And she loved sleeping upside down with her legs up on the wall.   I can't believe that I don't have a picture of her doing it since she slept like that all the time. Here's one, though - of her not using her dog bed and sleeping laying all crooked like she was prone to do. 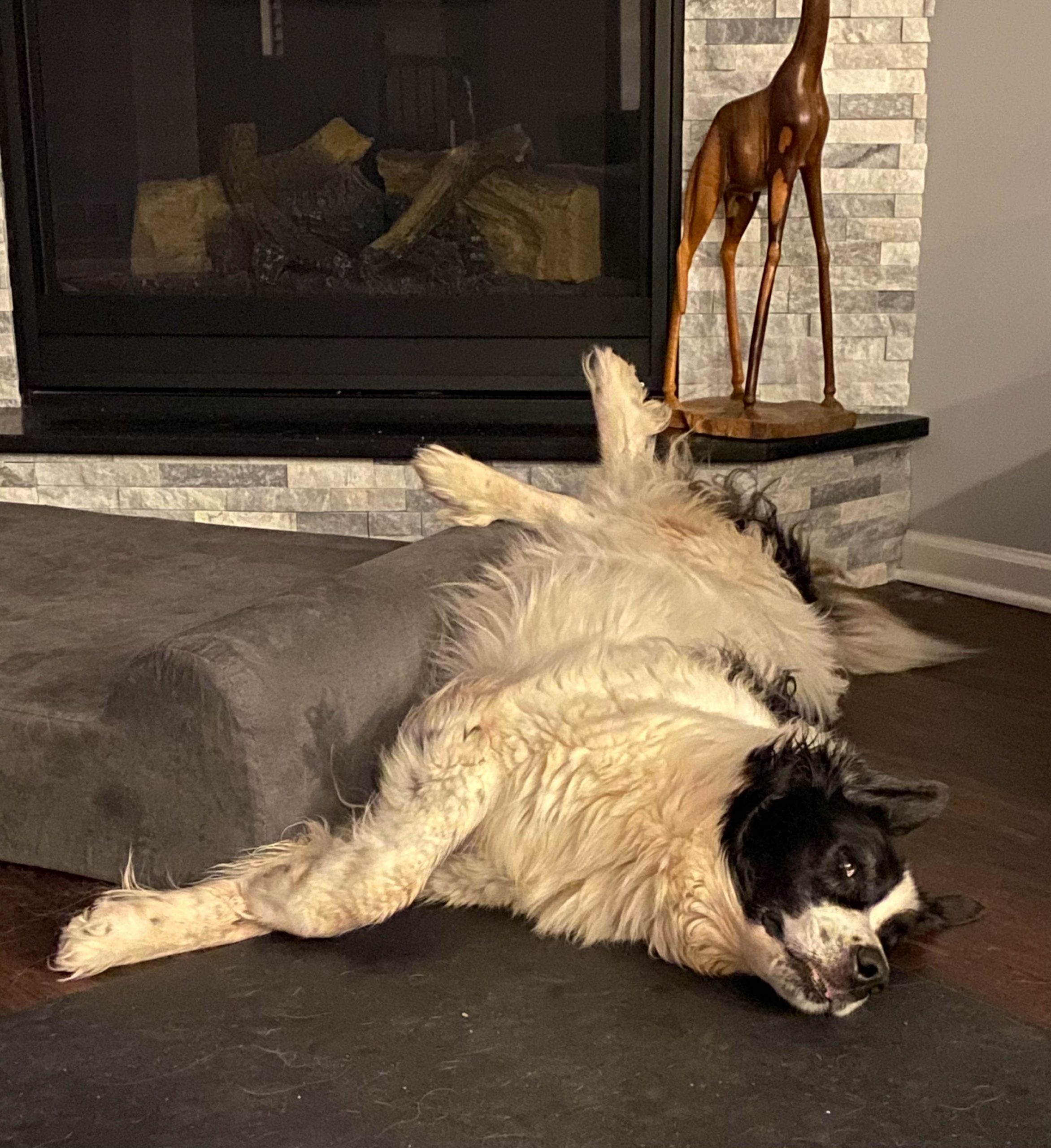 Though the course of her life, she lived in four homes.   She really liked routine (like most dogs) but she settled into all the homes fairly quickly.   She didn't like strangers and would bark at anyone new coming into the home - something I forgot because of Covid, I haven't had many people come to the house...and unfortunately on her last day, when the vet came to the house, she reminded me.

She had a lot of brothers.  First was Dusty (the blind lab) and Shadow (the Newfoundland), then came Spencer (Frank, the Ex's dog), then Rocky (the Golden), Caesar (my mom's lab), and Max (mix rescue).  After Frank and I became ex's, he got Buddie and Gunnar ( Goldens) and Rosie (beagle mix) and would watch my dogs when I traveled - so his dogs became her brothers too.

They all got along so well.    When Shadow died, Holly really had a hard time and just 3 month later, December 2020, she was diagnosed with bone cancer and the drs gave her 2-3 months to live.    She more than beat those odds living 16 months after her diagnosis.   Her therapy dr. at Tops Vet Rehab and I didn't believe the diagnosis but something was wrong with her legs.  He back legs were full of arthritis and she was getting therapy for them for over 2 years.    It was the front left leg that really gave her trouble - and that's where they thought she had cancer.

She went to Tops Vet Rehab every week for acupuncture, chiropractic treatments and other pain relief treatments.    She loved going there.  She loved the attention she got and of course the pain relief. 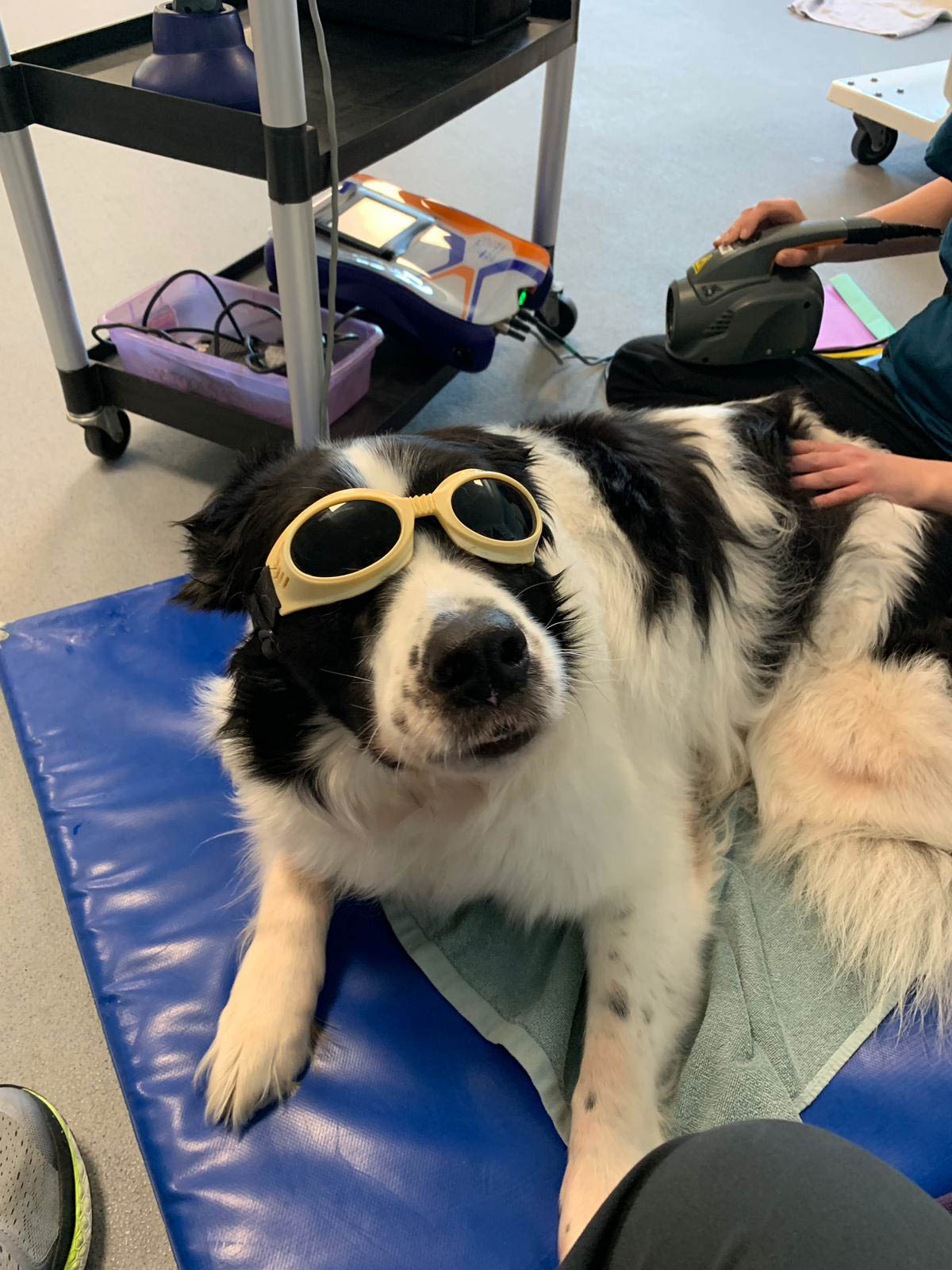 She was on a cocktail of 3 different pain medications and as long as I could manage her pain, she was healthy and happy.

Rocky very unexpectedly died in July of last year.   I was in South Africa and so the dogs had been staying with Frank.

After I came home and picked up Holly, it was really hard for her to be alone so Frank would watch her so she could be with his dogs and I would watch his dogs so she had companions.

For the last 6 months Frank's dogs have been living with me while he relocated out of state.  When he was ready to take them, we knew Holly's time was running short and decided for me to keep them for awhile so Holly could have continued canine companions.

Her pain, while mostly managed was getting worse and she was on the max dosage of pain medications many days.   The good days were getting less and less.

It's never easy...and this time it wasn't clear

There would be nights that she was in pain that I could not control and I thought - this is it, it is time...then the next day, the weather would change and she would be running (well - her way of running with 3 bad legs) outside and smiling...and I thought to myself - what was I thinking...she's so happy and full of life...how could I even consider letting her go.

Then she'd have more bad days and again the cycle and thoughts would haunt me.   Am I doing enough...what else can I do?   Is it time?   is she ready?    I had long talks with her and it was clear she wasn't ready.

This mental torment for me went on for months.   I wanted to do the right thing by her - give her as much life as she wanted but making sure it was a GOOD life and not one that was excruciating pain.    Dogs can't talk - I had to watch her body language, the position of her ears, how she carried herself, the tension on her face, how she was breathing.   Every minute of every day I was watching her, analyzing her quality of life.

The conversations I had with myself were endless and many times quite cruel.

And it continued.   The winter was so much easier for her.   As spring came and warmer weather and rain, she really started struggling.    About 10 days ago - she had her best day in over a year and I thought - a miracle?   did something jar loose?   Is she really going to be ok?   She was happy and spunky and feeling great.   That night, she had the worst night of her life.   She had already had her max dosage of pain meds and I couldn't help her.   I just sat on the floor with her petting her wishing for the pain to go away.   I knew it was time.   I was calling the vet as soon as they opened.    After awhile I went back to bed.   She woke me up in the morning and was running around the kitchen!   And the conversations would start again in my mind.

For the last week she was on max meds and she had the 2 worst nights of her life in the last week.    In between her moments of happiness - which were still existent but lasting shorter and shorter, she'd lay on the floor fully flat (and I was keeping my house at 65 degrees for her) and just panting and panting from the pain.

I called the vet on Monday and the soonest they could come was Wednesday the 27th.   Thank God the temperature dropped and her last days were days of super comfort.   On Tuesday night, 36 degrees out she was outside and I wanted to be with her so I donned my winter coat, hat and gloves and decided to light a bonfire.

Little did I know, the bonfire pit had ripped and so the pit was full of water, I emptied it the best I could and just lit a tiny bonfire in the corner so I could let her enjoy her time outside and I could enjoy time with her. 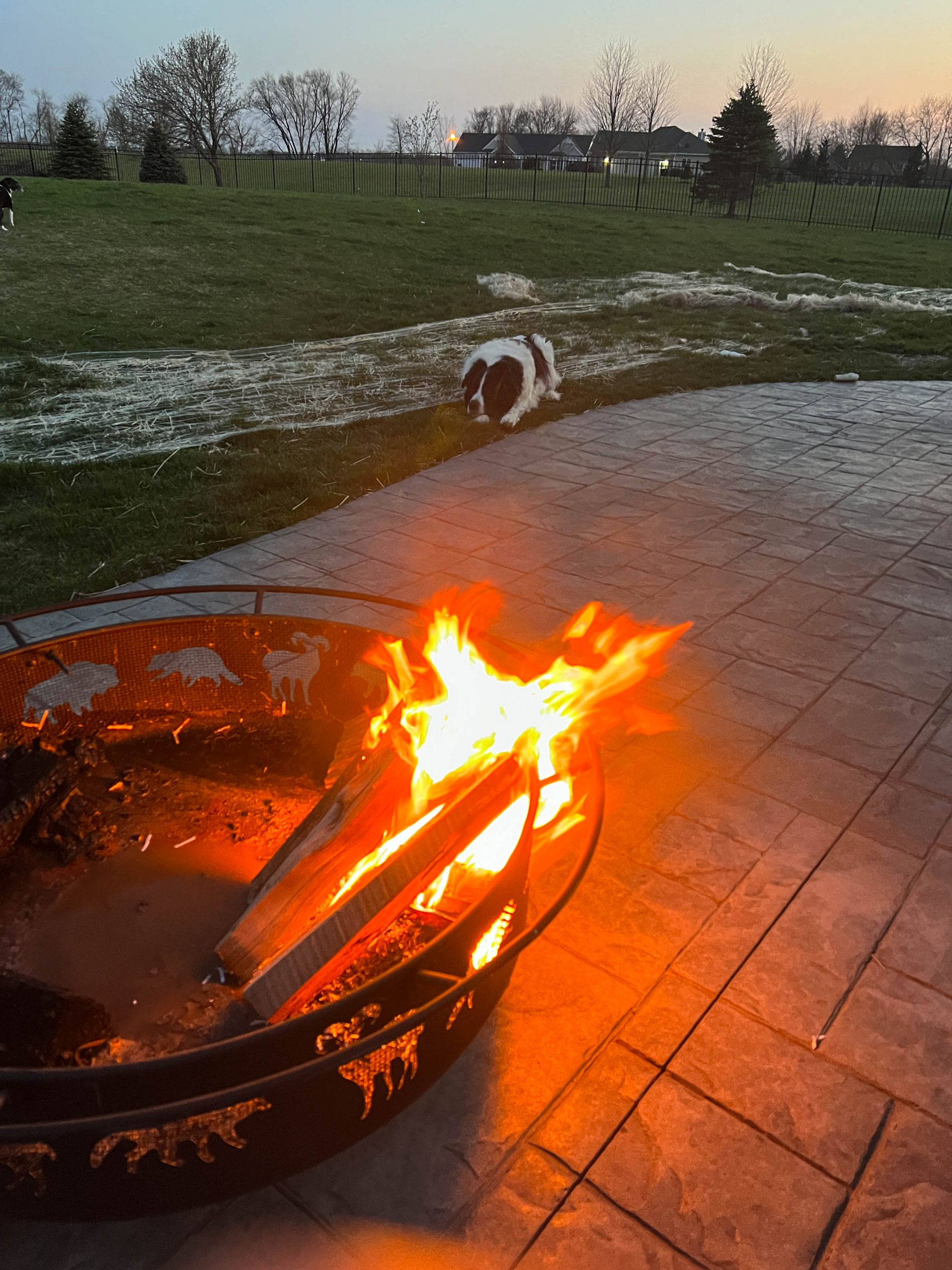 I spent most of her last day sitting on the floor with her.   Questioning if I had made the right decision because she was doing so well.

How many times I asked myself - how many days does she have to suffer for me to feel good about the decision?    Isn't it better for her to pass when she still has good life left?    I'm sure if you ask 100 different dog owners that question - you'd get 100 different answers.   There is no right answer - there's just your choice.   As her loving guardian I got to make that very difficult choice and decided to let her go when she was having a great day.   When she was still happy and not after multiple days in a row of suffering.

Was it the right choice?   I don't know.   Sitting at my computer writing this, with tears streaming down my checks, I still question was it time.   But, at the same time, I know it was.

Life can be so confusing and so hard with the weight of life and death on your shoulders.

Many people that knew Holly wasn't doing well have asked me if I was going to get another dog and my answer is NO.   And it's not because I don't want to open my heart.  It's because I want to experience more in life.   I want to travel more and it wouldn't be fair to a dog for me to travel as much as I desire and have them left behind.   Is it a no forever? - I don't know.   Maybe one day, I'll get tired of traveling and decide to settle down and stay home...for now, my next chapter is traveling around the world as much as possible.

God speed my dear sweet Holly girlie.   I know you are reunited with your brothers and sister you never met.   I know my dad is watching over you and all of you are watching over me.   I love you little girlie and I miss you.

Here is a short video of some of the memories of my sweet girl.