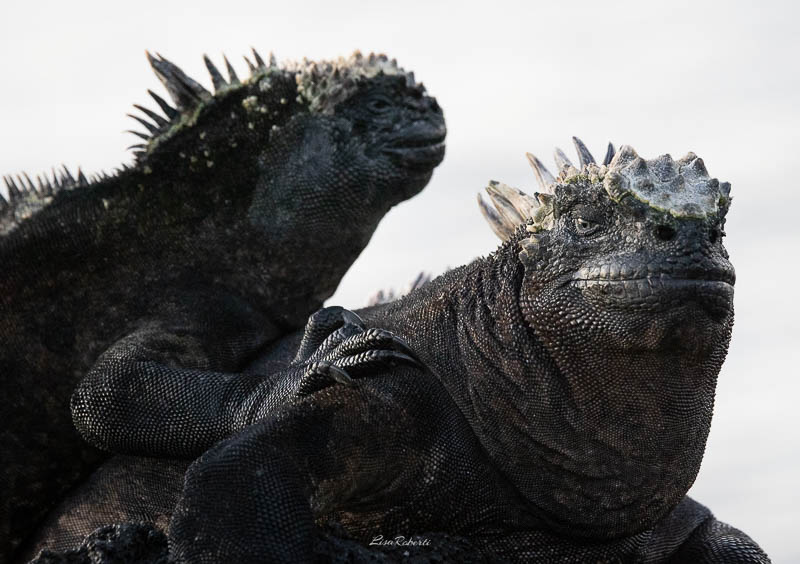 Have you ever seen the documentary "Island of the Dragons" narrated by David Attenborough?   (the below video is the entire documentary)

It was filmed on Fernandina Island...the next stop on the Galapagos journey.

followed by 5:45 into the pangas to make it to the island and set up before sunrise.

The pangas pulled into a cove and up to a little pier which was slippery and led thru a forested region over to the ocean. 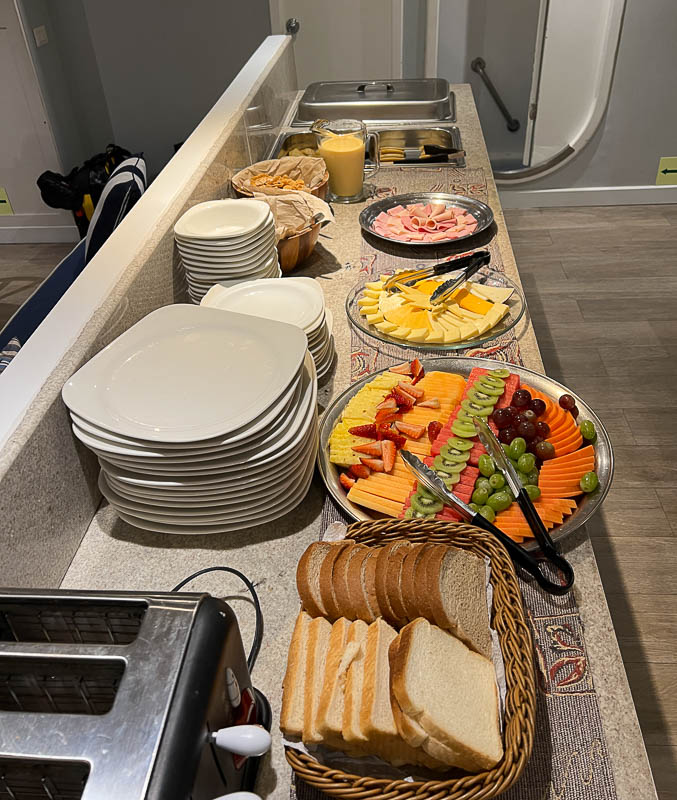 First view in the early morning light was a sea lion and then turn the corner and we are greeted with thousands of marine iguanas. 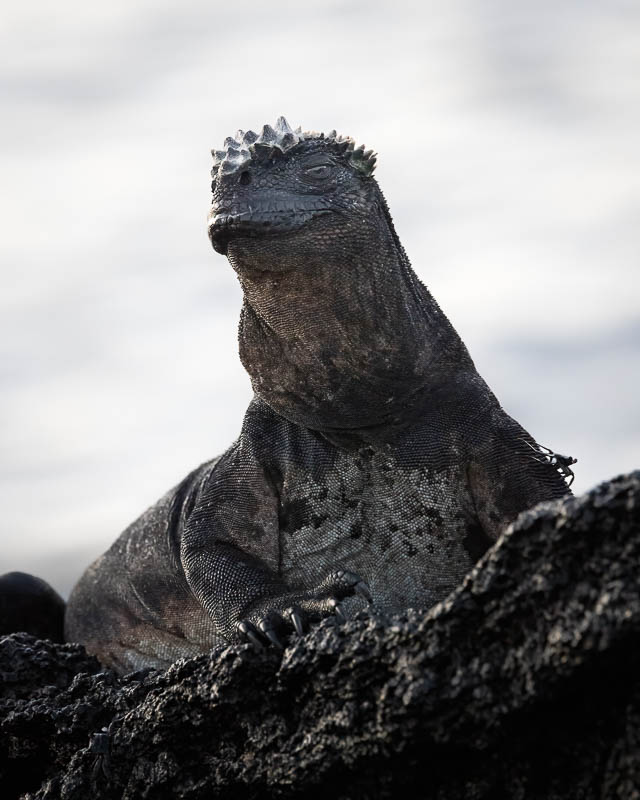 Fernandina Island is a nesting area for the marine iguanas.   And if you watch the film above, you'll see the trials that the iguanas have to go through to just survive.

We did not witness any of the eruptions or lava flow.  I'm not sure if it was happening on another part of the island or if it just wasn't flowing when we were there. 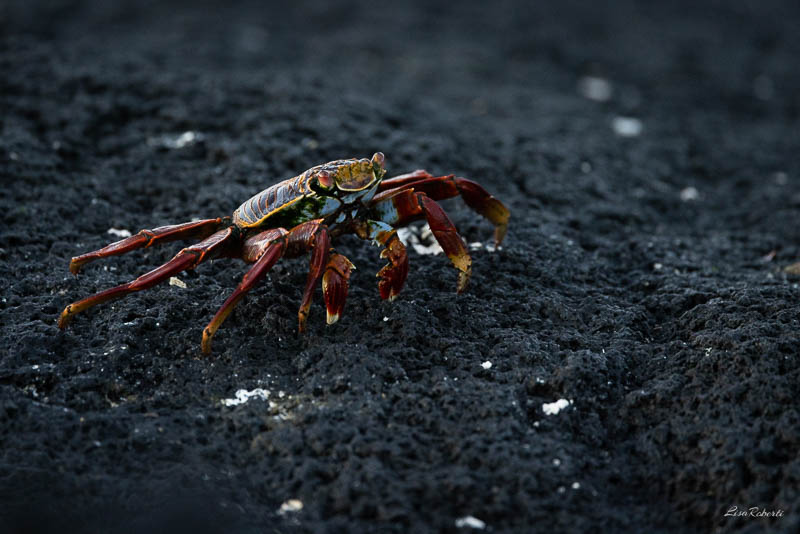 After taking pictures of the iguanas and crabs for awhile, there was a walk around the nesting area.  It was during this time that we saw the snakes made infamous in the documentary.    They were waiting for their opportunity to feast on the baby iguanas emerging from their nests.

Baby season had not yet started...so we didn't see the babies running for their lives from the snakes and the birds of prey. 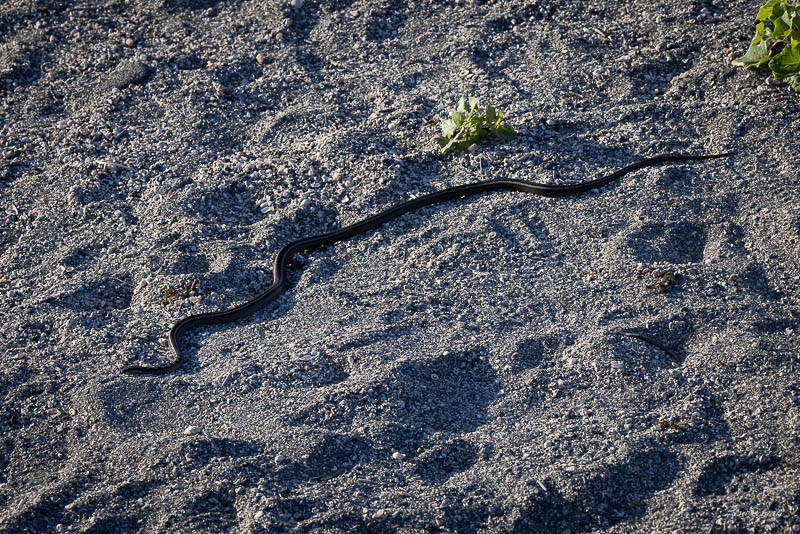 A hawk in a tree looking...probably for prey 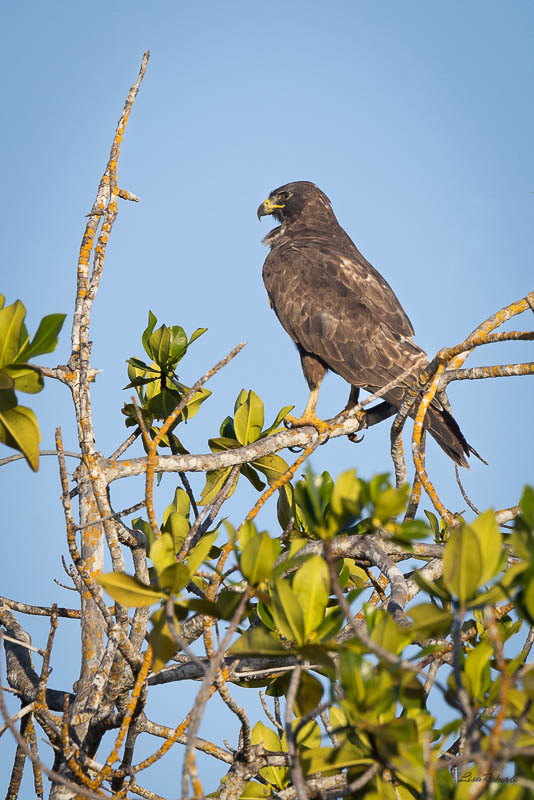 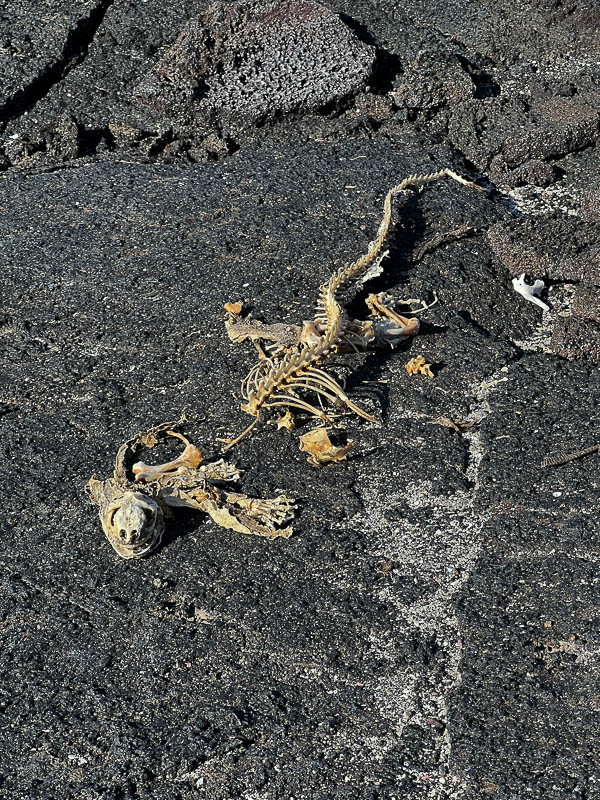 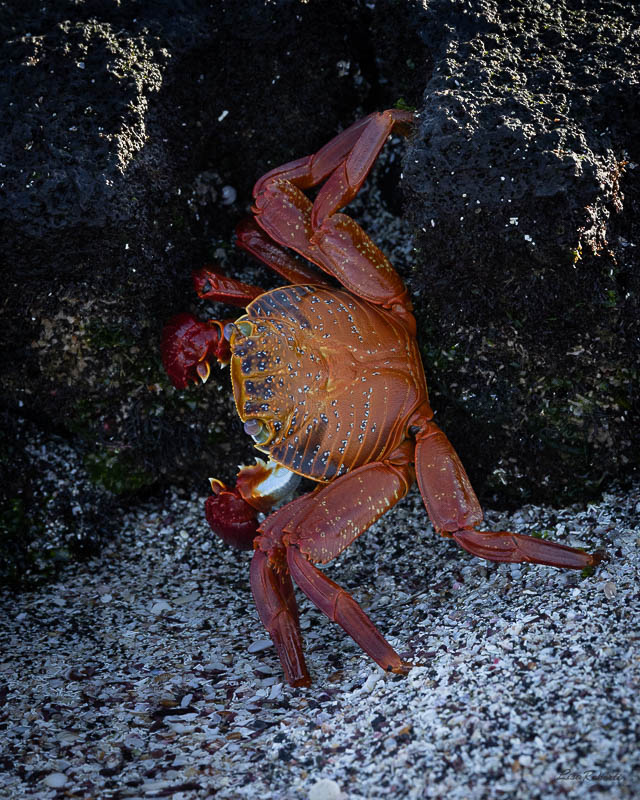 There was a baby sea lion in the water and then 2 moms with their puppies.

the baby sea lion was crying for his mama.

the moms leave the sea lions on the beach and then go to the sea for food and then come back (hopefully) to feed the babies.

This baby's mama had not come back yet and he was trying to get close to the other mamas and they kept chasing him away.

the calls from the baby were so very sad but the baby was in really good condition so we were hoping it was just a matter of time before mama came back. 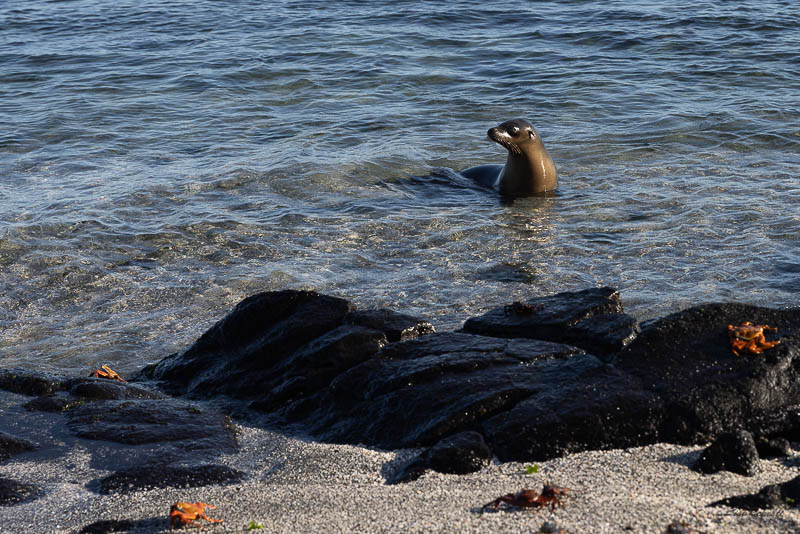 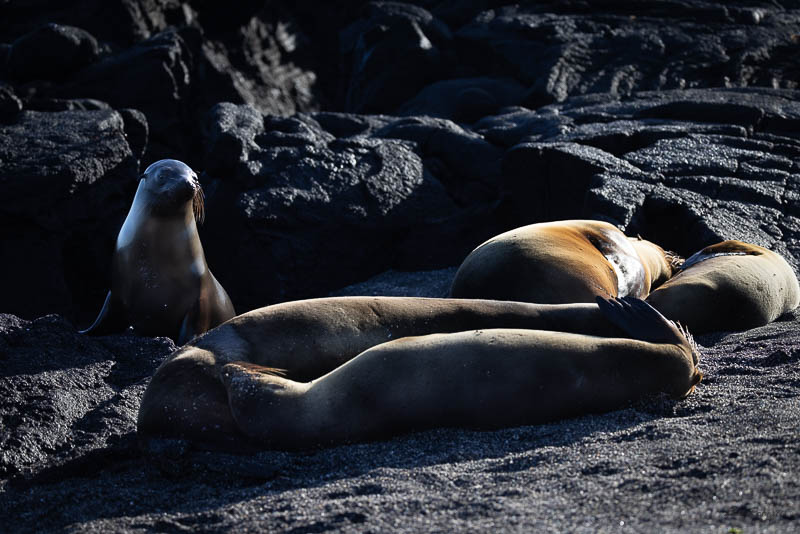 Continuing the walk around, we found another young sea lion by himself.   He appeared to be younger than the first one and also looked to be in very good condition! 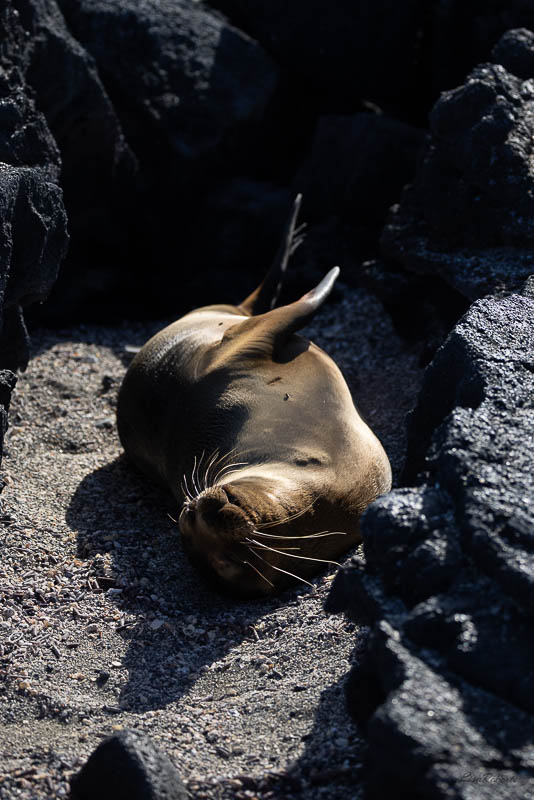 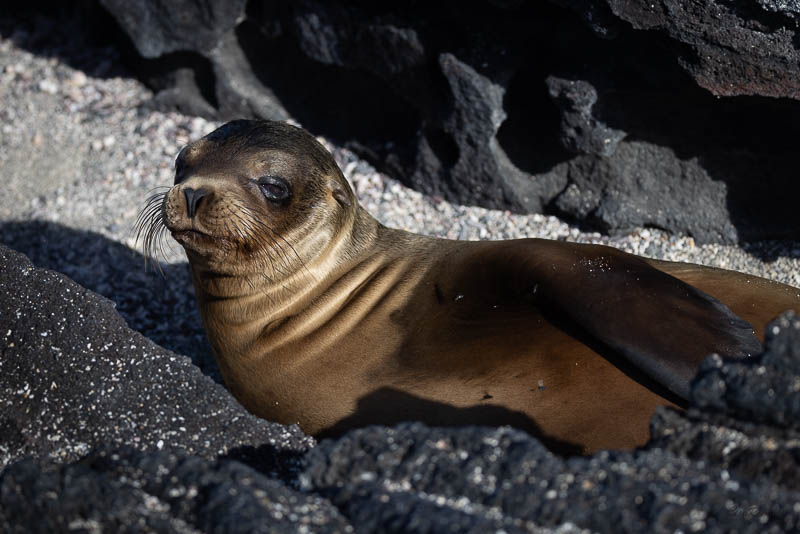 Completing the loop, almost back to where we started was another field of marine iguanas.   One of them had a lizard friend. 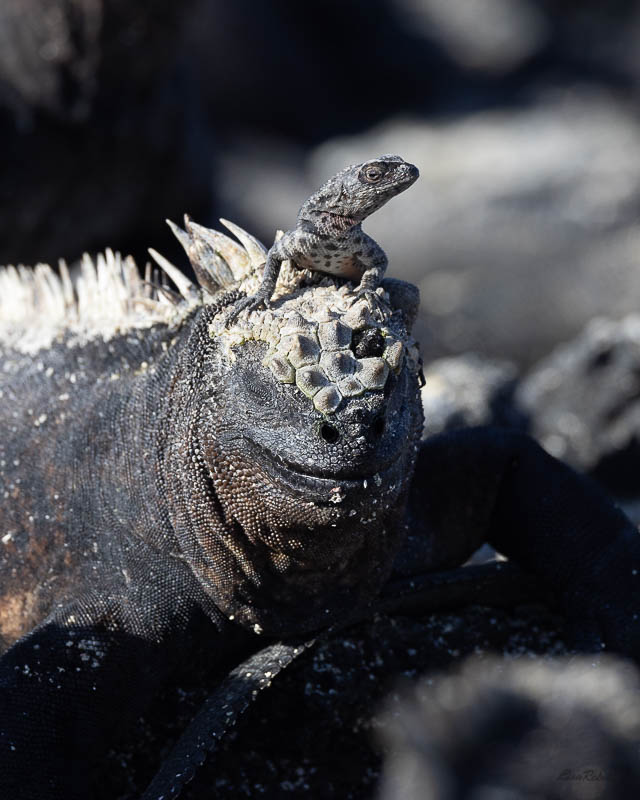 At the little pier where we had to pick up the pangas, were a bunch of sea lions.   They were so playful as they jumped on and off the pier into the water, splashing around.  What a great way to end our visit to Fernandina Island!

As we got back to the catamaran, there was a stowaway.   Could he be any cuter?   Good thing there were two areas for the pangas to disembark so we didn't have to disturb this guy. 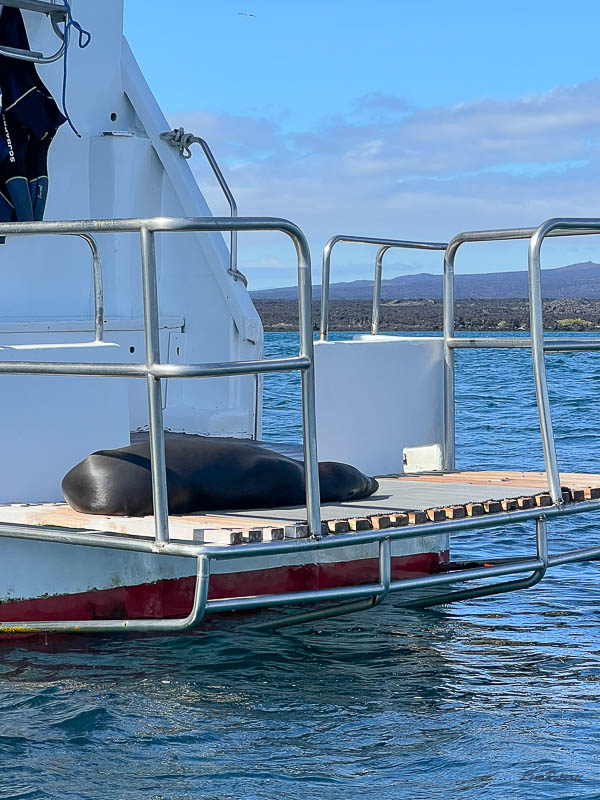 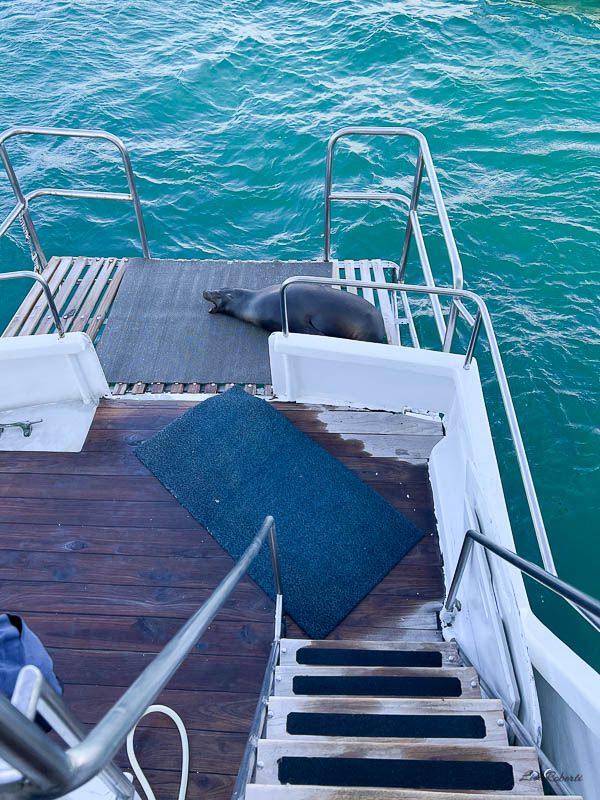 Shortly after we got back, it was time for snorkeling.   The hope here was to find swimming and feeding marine iguanas.   I did see a few but I found more turtles than iguanas.   Both were feeding off the algae on the rocks.

Another great and full morning in the Galápagos Islands.   Back to the catamaran after snorkeling for lunch and off to our next location for the afternoon.

Want to see more pictures from the Galápagos Islands or my other travels?    You can find my travel gallery at

If you enjoy the articles, images, and videos, then please join my newsletter.    I send out a newsletter periodically through the year when I have great stories or information to share.