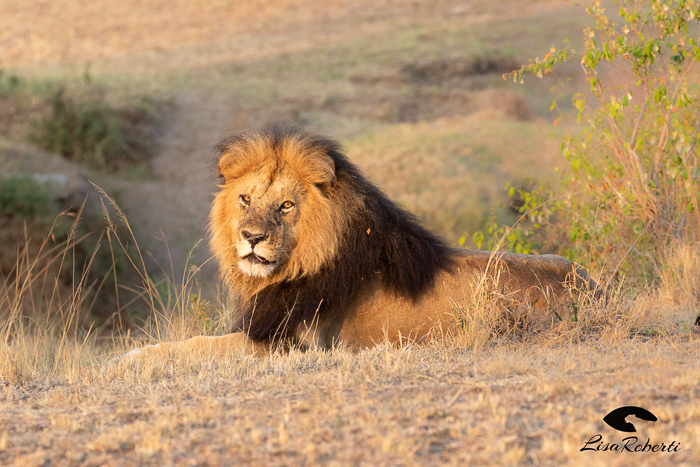 My love affair with Kenya started 26 years ago.   Oh, I could tell you it’s because of the people – so kind, welcoming, and generous of spirit…or because of the amazing animals and wildlife areas.   But truly, it’s always been because of the way being in Kenya makes me feel.    From the first moment I placed my foot on the ground, I truly felt a sense of home, of acceptance, of belonging.

My emotions in Kenya run the gamut from awe and wonder to anguish and heartbreak.  Mother Nature is truly at her finest in Kenya and nature shows all of her sides.

After a 23 year absence, my love for Kenya was rekindled in August 2015 – and once again, my heart was set on fire.  During that trip, I “met” some of my favorite big cats.  My curiosity and desire to know more about them, has had me return time and again to Kenya.

This is my story of “Lipstick”.   I didn’t know his name the first time I saw him, but the first day I got to spend time with him is etched in my memory forever.

On our mad dash back to the lodge because it was late and getting very dark –  we spotted them – the BIG BOYS!    The ones I have been dying to see.    2 big black-maned lions!    We couldn’t stay – it was late and getting really dark….so a quick snap and then lots of prayers to the universe that we would get to see them again.

The morning came quickly as it always did – crisp and cold, so unexpected when you are in Africa.   I was beyond excited for the day – because today, I get to be with one of my favorite guides, Edwin alone!   Everyone else in my photography group chose to visit a village – which left me alone on safari.

Edwin asked me what I wanted to see.  The guides really can’t control what nature shows us, but they DO have this uncanny 6th sense of finding situations and animals.

So, I told him – I wanted the big black-maned boys!   Like the ones we had seen 2 days before.  So off we went in the dark of the morning, headlights on, to search for these magnificent lions.

About 15 minutes out of camp, Edwin stopped the car and pointed.   I have no idea how he saw anything – the migration was late this year and the honey-colored grass was tall – probably over 5′ in some areas AND it was still really dark!  I figured he saw rocks – but we decided to get closer to see what we could see.

And there they were – 2 of the most beautiful lions I had ever seen.   They had these magnificent black manes and were HUGE!   There were also lionesses and cubs a little ways off finishing their meal from the night before.

Edwin and I stayed with the pride for over 2 hours.   I didn’t see much of Lipstick that day, as he chose to stay in the tall grass with his “lady friend”, but my love for him and his brother, Blackie, their “girls” and cubs started that day.    I spent the 2+ hours watching and photographing the moms and the cubs, and Blackie came out of the grass for a little while too.

My next encounter with Lipstick and his brother and pride was 5 months later.   My safari vehicle got a notice that there was a pride of lions on an eland kill.   The pride had successfully taken an eland sometime the day or night before.   This is a very difficult feat and demonstrated the strength and teamwork that the pride was able to maintain.   When we arrived, most of the eland was eaten.   The females and cubs, chubby from their meal were off a ways sleeping off their food coma (well, the mamas were trying – but the cubs kept using them as jungle gyms).   Blackie had just walked off and Lipstick was still feasting on dinner.   Lipstick’s tummy was protruding and round like a watermelon – but he was determined to have more.   We stayed with them for the remainder of the afternoon.

My group was lucky enough to see him, his brother, the cubs and mamas again a few days later.   We stayed with them most of the afternoon and mostly hung out with the mamas and cubs.   There were several ages of cubs, including one pretty tiny cub.   We thought he must have just recently been introduced to the pride because he was so little – the mom even tried to carry him a few times when he fell behind.

Mother nature showed her tragic side today.   It is always difficult for me to watch an animal die…but nature makes it so one animal has to die so others can survive…and whenever I see an animal being killed, I comfort myself with that thought.   Today, it was different.   Today, I had to bear witness to the baby cub from 2 days ago being killed – not for food – so there was no comfort here.    This is a very traumatic story and one for another day.

Blackie and Lipstick and the rest of the pride were not far.   But even as powerful as the two of them were, there was nothing they could (or would) do to save the little one.

After witnessing the destruction of a life so young, we went over to the Big Boys and the cubs.   The cubs didn’t seem to understand what had transpired, the other lionesses did.   Not sure if Lipstick and Blackie did or if they just “didn’t care”.   The cubs were trying Lipstick’s patience but it was nice to see them playful after witnessing such a traumatic event.    Even with Lipstick being grumpy, the
cubs still played around him anyway.

I got to see my beloved Blackie and Lipstick again in July 2017.   He was with a lady friend on another honeymoon.   I only saw him on 2 occasions on that trip.  To my untrained eye, he looked to be in his prime and still extremely strong.

I knew they were getting up in age and there are several young and strong coalitions in the area, so my goal on this trip was to spend as much time as possible with my beloved black maned boys.   Unfortunately, due to unexpected rains and river flooding, I was only able to see Lipstick and Blackie twice.

As I left the Mara, I had a feeling I may not see them again.    Through different facebook groups and Instagram, I am able to keep up with my beloved cats between trips.

It was with great sadness that on the morning of May 18, I saw the devastating picture of Lipstick – once a beautiful majestic huge powerful lion, reduced to skin and bones and no longer of this world.

A friend of mine gently reminded me instead of grief, I could rejoice in all the moments I got to experience his magnificence.   So, here is his tribute and some of my images of this incredibly beautiful and powerful lion.   A lion that made my journeys to the Mara that much more special and unforgettable.   May you rest in peace beautiful boy in whatever plain you belong to now.

2 Replies to “Lipstick – My tribute to this majestic lion, Masai Mara Kenya”