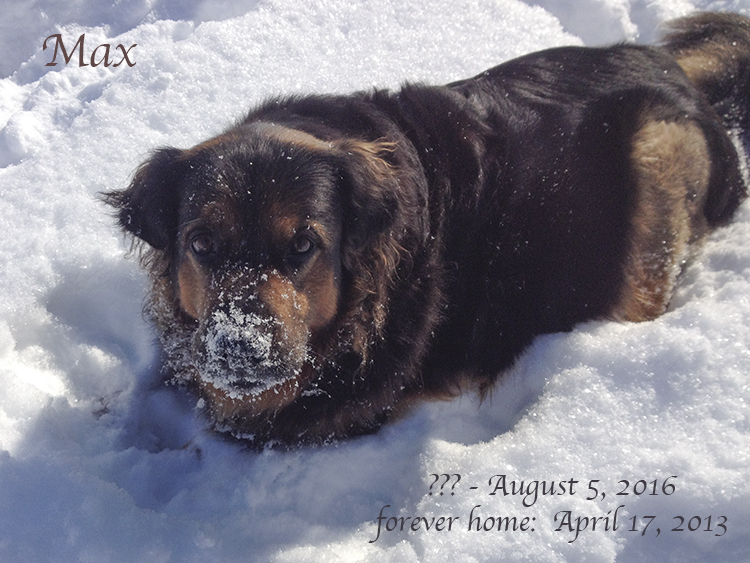 I can’t imagine the life he lead before he came to Last Day Dog Rescue…well, wait, yes I can and it’s not nice.

His teeth tell part of the story, no front teeth on the top or bottom.  Concaved canines – probably from gnawing on metal of some sort.   The condition of his body – so skinny even after a month of being in rescue, show that he had known hunger – a lot of hunger and probably thirst and that he’s been on his own for a while.

The fact that he was VERY afraid of guns – tells us that he was probably shot at some time in his life – and since he lived in the streets of Detroit for who knows how long and that fact that he was REALLY  afraid, I’m guessing that he had more experience with guns than I ever want to know about.

He had no hip joints and that caused him a lot of pain.  Pain that was manageable with acupuncture and medication…but not when he was out there all alone in the streets of Detroit.   My poor boy, I don’t want to imagine what his life was like before he found rescue.

I also know that once upon a time, before he came to Last Day Dog Rescue, he knew love.  He had a home, somewhere.   Because when he came to live with us, he had perfect house manners.   Even though he knew starvation, he was a perfect gentleman around his food and during treat time – even allowing the other dogs to take the food from him if they wanted it and people too.   He loved going on car rides and loved to snuggle.

How did he get from a life of love to the horrible streets of Detroit?  That is a question I will never have an answer to.   I wonder if his first humans miss him as much as I miss him now.   Did they try to find him or did they put him on the street thinking he’d be better off?   I want to think the best of them but sometimes it’s hard.

In Spring of 2013, it all started when I was on a cruise with my mom.  Somehow I had gotten it into my heart that I needed to adopt another dog and went to petfinder every chance I could – searching for my next cherished family member.   That’s when I saw the cutest video of Highlander.

It was love at first watch.   I probably watched the video a thousand times.  I emailed back and forth on the terribly slow cruise ship internet with Last Day Dog Rescue – begging them to let me be his human.    Being such the cutie that he was, he got lots of applications and somehow, Last Day picked me to be his human.   I don’t know how I got to be the lucky one but I am forever grateful that I was.

2 days after returning from the cruise, on April 17, 2013, I took the 5.5 hour drive to Detroit with a dog bed in the back of the dog van and a new leash and collar to go meet my new boy.    5.5 hours back home and it was time to meet the family.   Since I had never introduced adult dogs to each other before, Vicky from the Illinois Alaskan Malamute Rescue (www.IAMRA.org) came over to help me make sure everyone would get along.

For the most part, Max fit right in – every once in a while, he’d have a stick up his butt and decide he wanted to be the big dog in the house and he’d go after Shadow, my newfie, who outweighed Max by about 100 pounds.   Shadow, the sweetheart that he is, would just look at Max with the expression of “seriously dude?”.  They would work it out for a while and then every once in a while, Max would be a jerk to Shadow again.   When they loved each other, they would lay together on one of the dog beds or on the floor next to the couch.   Most of the time, they ignored each other and peacefully coexisted.

I think Max was secretly in love with Holly, my mix rescue girl.  He would follow her around like a lovesick puppy.  Holly would tolerate the attention for a little while, but if he got on her nerves, she had no problem telling him so.    They loved to bark at the deer and run up and down the fence line chasing them…and bark at the birds by the lake and of course at the people that would wander into the park next to the house.   I think Holly will miss him just as much as we will.

Max was super tolerant of the very spoiled boy Rocky, my golden.  Oh, Rocky – you really know how to push for more food.  Max would relinquish his food bowl to the “starving” fat boy Rocky whenever we weren’t looking.   So, we had to stay on top of that one – especially in the end when it was hard for Max to eat.  He also liked to play with Rocky.   They never got too rambunctious but they would wrestle now and then and run around together.

Max’s favorite place was outside.  He loved to be outside.   Walking the perimeter of the yeard, laying on the deck and watching the world go by.   It hurts my heart that the last few days he was of this world, he couldn’t be outside because the humidity made it too hard for him to breath.    He would lay outside for hours and we always had to double check he was in the house before we went to bed or left to go somewhere.

Max also very much enjoyed going to daycare.   Somehow they knew what days were daycare days and Max would run to the laundry room and just dance around and jump around waiting to get in the car.  (how I wish I had taken the time to take a video of him doing his happy dance).

It made it difficult to put on his leash and collar – but his exuberance was infectious.   It was very hard on him and me on the days when he couldn’t go to daycare but the other dogs could – like when he was recovering from his 2 knee surgeries.

He was such a trooper through those surgeries and his recoveries.   12 weeks for both knees.   Although we knew how much he wanted to go outside and down the stairs, he was never pushy and just made it so easy for us during his recovery.   He took his ice packs and never chewed on his stitches – no cone head for this beautiful boy.

Because of his hips and the 2 surgeries, we could see that he was losing strength in his back legs.  His brother Shadow, the newfie, had been going to rehabilitation therapy for a while because of nerve damage, so I thought it would be good for Max.

Max went twice a week in the beginning and then once a week for the last year.   He loved his Thursdays – going to Tops to see Dr. Kevin and especially to see Carrie.  He did underwater treadmill to keep his strength up and also laser therapy to help him with his arthritis in his joints, and acupuncture to also help with his arthritis and pain management.   It really kept him comfortable and helped give him an incredible quality of life with the ability to still do the stairs so he could spend time in his beloved back yard.   I’m going to miss watching him working in his underwater treadmill and him wearing his eye protection during the laser treatments and seeing him relax during his acupuncture treatments.

You never think “it” will happen to you.   You always think that there will be a tomorrow.   As I look through the pictures of Max, I realize there are none of him and I together.   There aren’t enough memories captured forever on “film”.  It all happens so fast and in a blink of an eye, everything changes.

Several weeks ago, we got the diagnosis that Max had mystastic oral melanoma – non-operable.   There were treatment possibilities – and we went through the tormented decision of do we treat or don’t we.   Radiation once a week to his throat – having to anesthetized and intubated.   Then to watch him suffer again somewhere down the line.   The cancer was in his nasal cavity, on the roof of his mouth and starting to block his airways.  Ultimately the decision was taken away from us as the cancer was so aggressive that treatment would not have helped in time.  So, we spent time with him and spoiled him and little did we know last night when we went to bed and when he came up on the bed with me, that it would be for the last time.

During the night his breathing became very labored.   I had rented an oxygen machine for him – thinking that if he could get more oxygen per breath, he’d be better off.   So, I sat with him all night with the oxygen machine.   While he was awake, he was fine – he could breathe through his mouth by panting slightly.  It was when he fell asleep – he had such a hard time breathing through his nose that he could only sleep for a few minutes at a time because he would wake up to breath – even with the oxygen.    He started bleeding from his nose – not a lot and I’m not sure from where.   He became a little disoriented from the lack of sleep and we knew it was time.

With the help of an at-home euthanasia vet, we said our final goodbyes and buried him this afternoon up at the family farm next to his brothers and sister he never met:  Caesar, Zoey, Dusty, and Spencer.   I know they were there at the rainbow bridge waiting for him and they will guide him until one day when we meet again.   I told him to tell my dad, my uncles, aunts, and cousins that I love them and miss them and asked that they continue to watch over me and my family.

So now my heart has yet another hole that will never be filled.   Each of these amazing dogs has taken a piece with them.

I will never regret giving Max a home, even though it was for such a short time and even though my heart is completely broken right now.   I wish I  had taken more pictures and videos and of course wish I had spent more time with him.

Everything changes so quickly, I just have to remember to take the time NOW, when I have the time, because tomorrow may be too late.