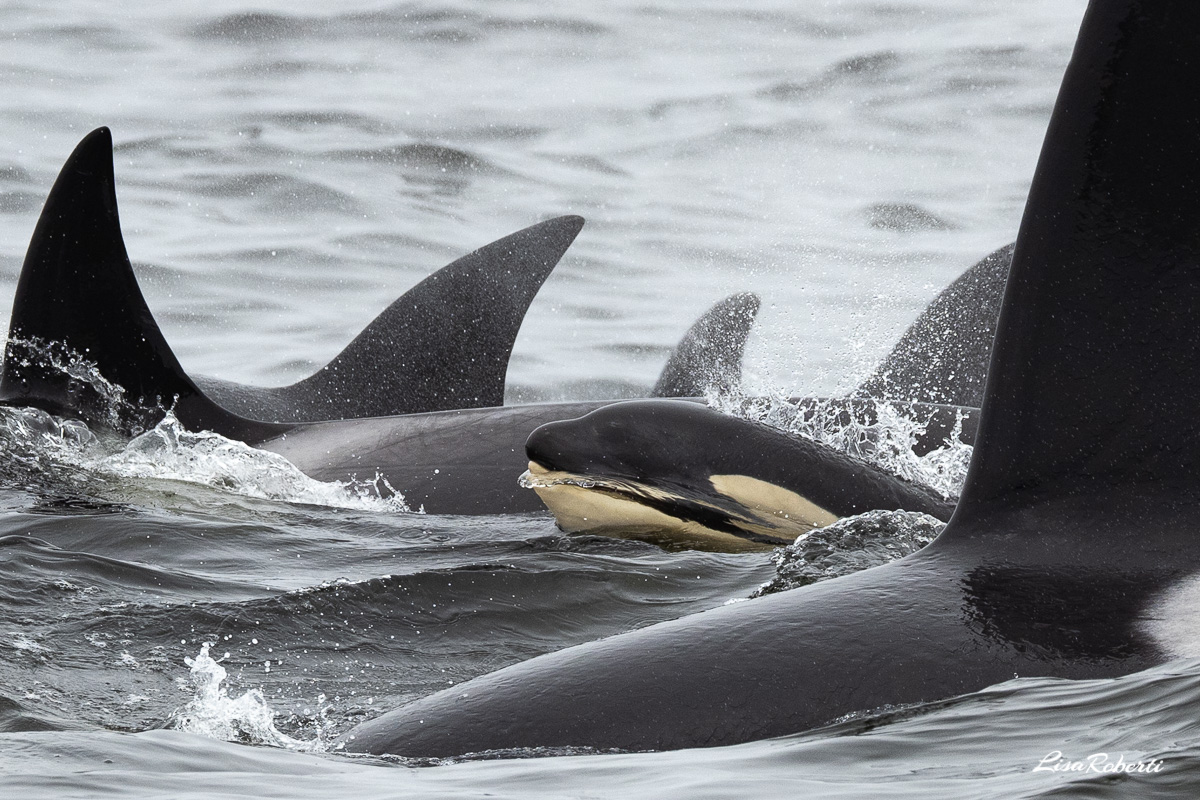 I traveled to Monterey California with a friend of mine who is a great photographer. We both love whales and were feeling quite restless, so about 6 months ago, we planned a long weekend trip, which we took last week.

The following is the summary of our adventure.

Adaptable and Flexible are necessary for any traveler.

In order to travel today, it is important to remain adaptable, flexible, have a good sense of humor and patience.

Between the two of us, we faced:

We had to pivot multiple times. Communication and being nice made all the difference.

And it was definitely worth it!

I easily get motion sick (small airplanes and big waves on a cruise ship can easily do me in, I have even gotten sick on a helicopter) so I purchased a “relief band” to try and help alleviate that problem.   This was going to be my first time using it.

When we arrived at check-in, they had a little sign up that said to take motion sickness pills that day.   I thought, ah..it’s only a 4-hour trip, I want to see how well the band does – it had gotten great reviews.

After a little while on the water,  we found a pod of orca.

By this point, many people were getting seasick.

I was doing ok – not great but not completely taken over yet by the motion until I put my camera up and started looking thru the viewfinder.

The swells were so tall, to steal Michelle’s words – it seemed like a 30’ wall of water was coming right at us.    Big ships were disappearing from the swells – you couldn’t look at the horizon – it was there one minute and completely gone within seconds.

At one point the boat was surrounded by orcas, I didn’t see them.

I didn’t see them because I was in the back of the boat throwing up – for 2.5 hours.  Probably didn’t use 10 throw-up bags, but it was pretty close.  I’ll spare you the details of how horrible I felt and the knots in my stomach.

At the time, I swore I would NEVER EVER get on a boat again!  Yea, it was THAT  bad.

In time, everyone (and I mean that literally, not figuratively) on the ship succumbed to seasickness except the crew.   They actually brought us back early.

Once on land, things got a little bit better.   We sat in the car – parked and not moving for about 45 minutes and ate our lunch that we had packed.

Afterward, we took the beautiful 17-mile drive.  The coastline is stunning and the waves were definitely active!   I was still not feeling great, so I mostly just enjoyed with my eyes and not my camera. 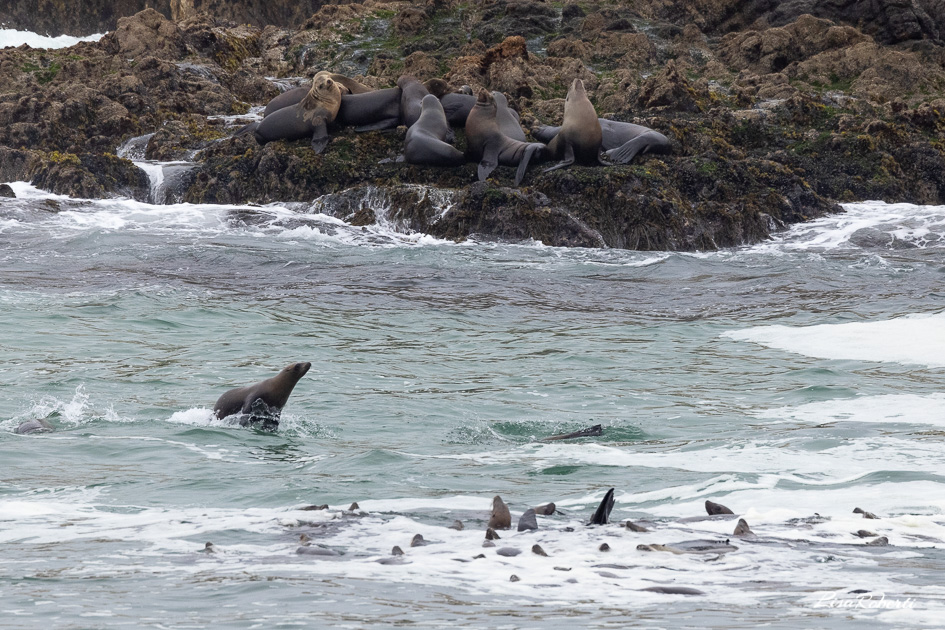 Day 2:  There is NO WAY in Hades, I’m getting back on the boat with bad seas!  How about some cute otters instead?

The next morning, we woke up early and went back down to the docks to take an 8-hour whale watch trip.

When we got there, we asked about the seas and were told they weren’t as bad as yesterday, but they were still bad.    The forecast said they would get better thru the week.    They also told us we should take a motion sickness pill at night before bed and then again in the morning.

So, we decided to skip the 8-hour boat trip.  (And we found out later, that we didn’t miss anything !)

Instead, we went up to Elkhorn Slough.

We were able to arrange a private boat trip with Monterey Eco Tours.    They have an amazing electric boat.   The boat was so quiet we didn’t even know it was running – and there were no vibrations and no diesel smell!

Their knowledge about the Slough was great and we learned a lot about the surrounding areas.   I highly recommend them if you are in Monterey for a trip!

We spent over 1.5 hours photographing birds, otters, and seals. 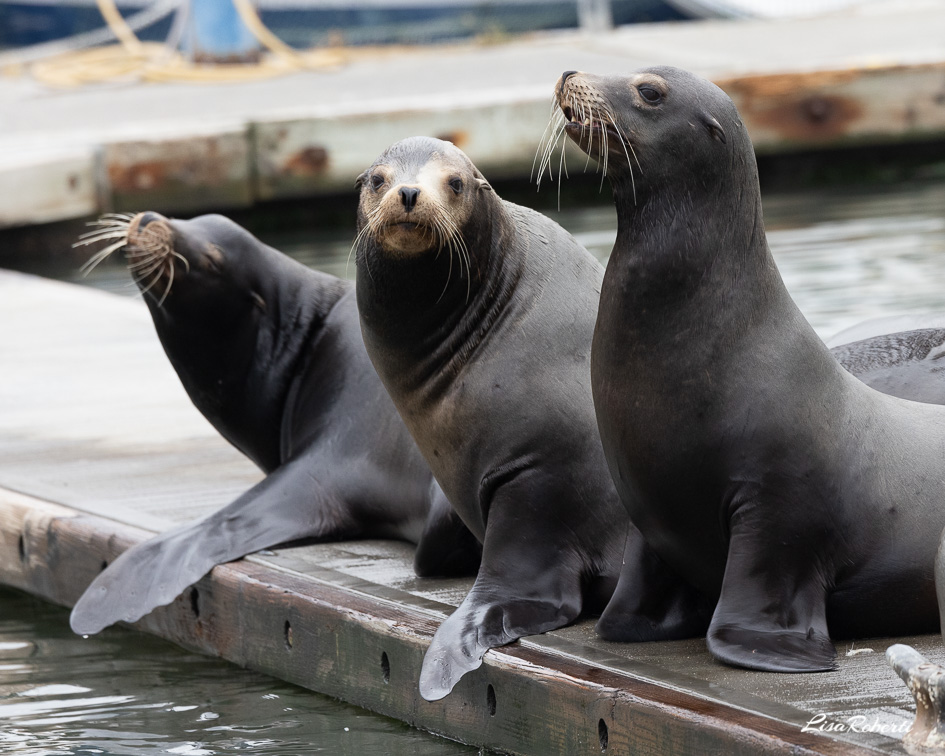 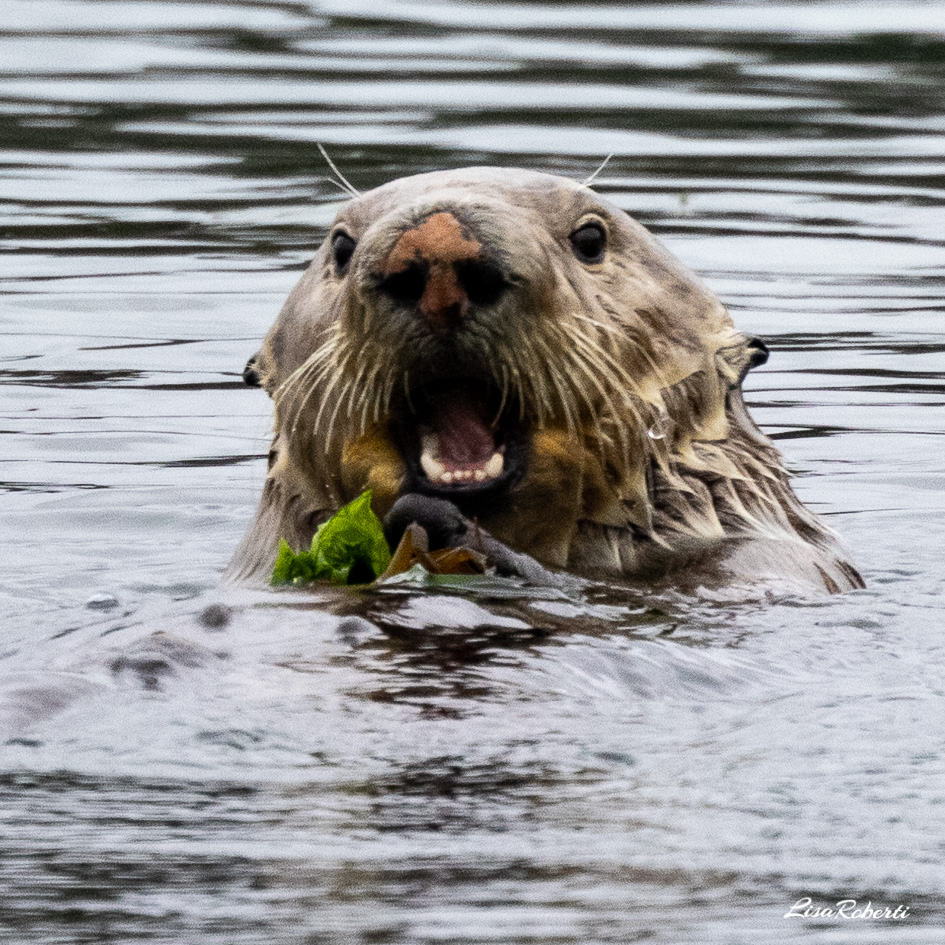 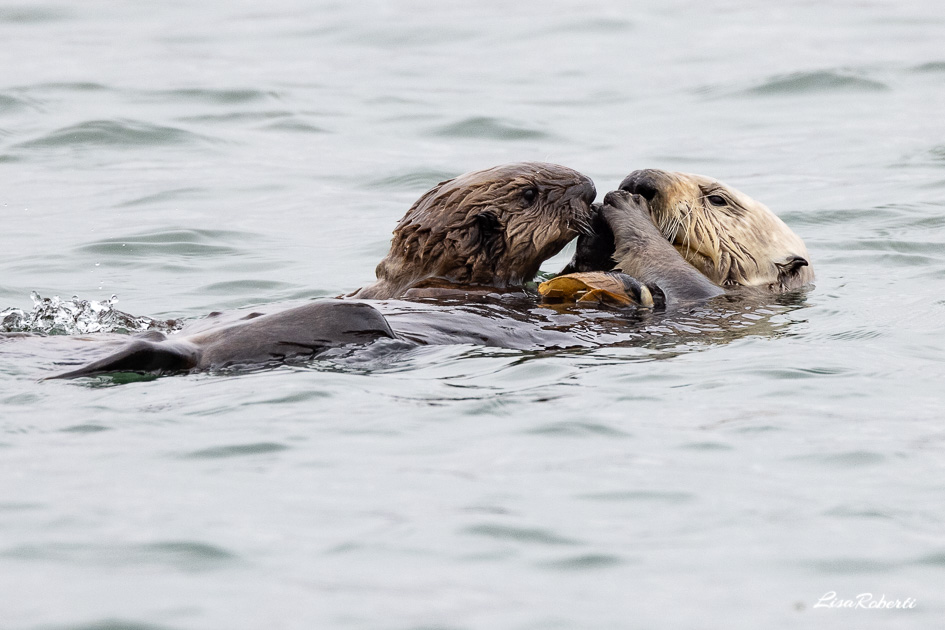 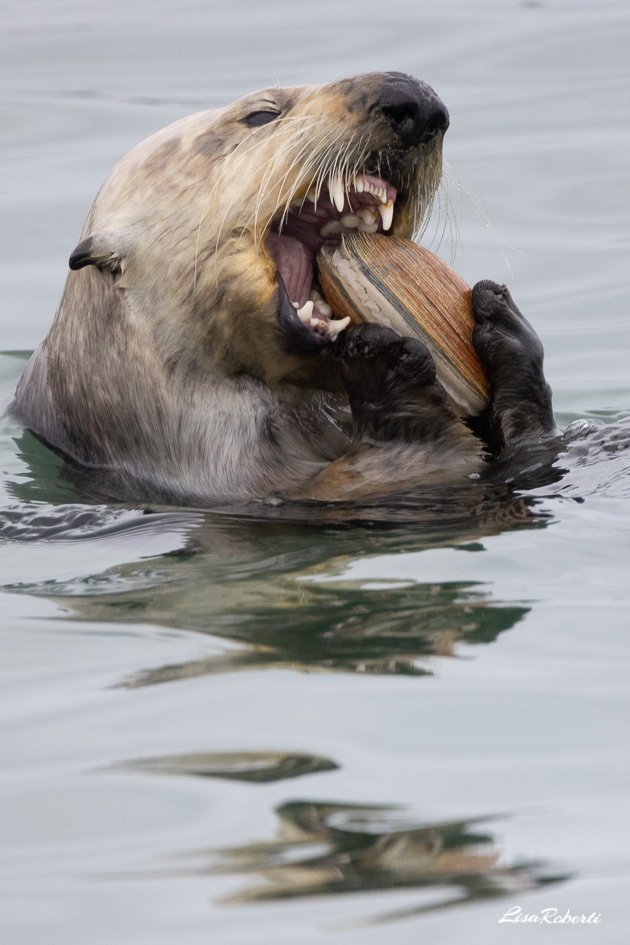 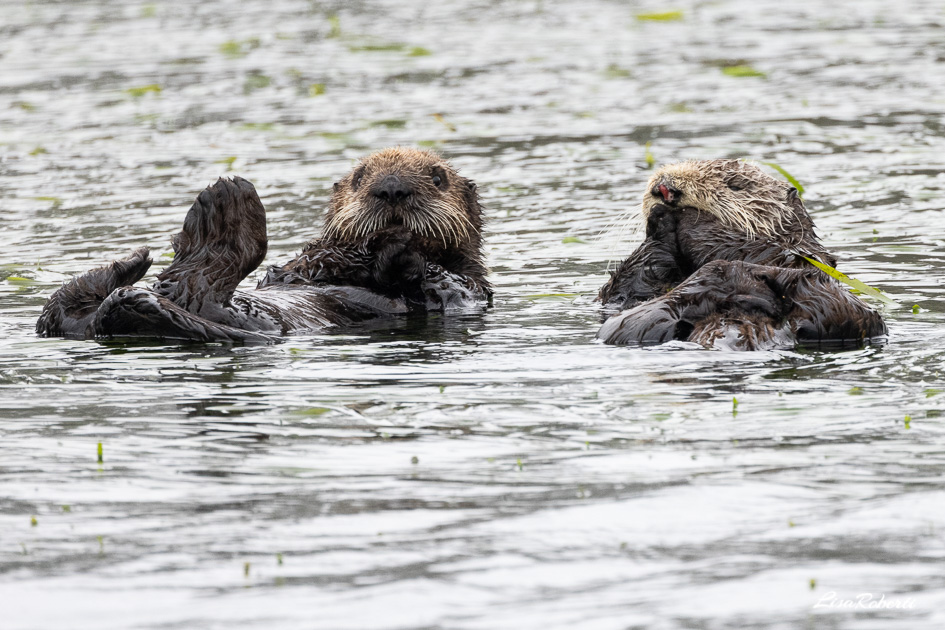 Day 3:  Orcas have a successful hunt

Fully drugged up with anti-sea sickness medication, we went on the 8-hour whale trip with Monterey Bay Whale Watch. 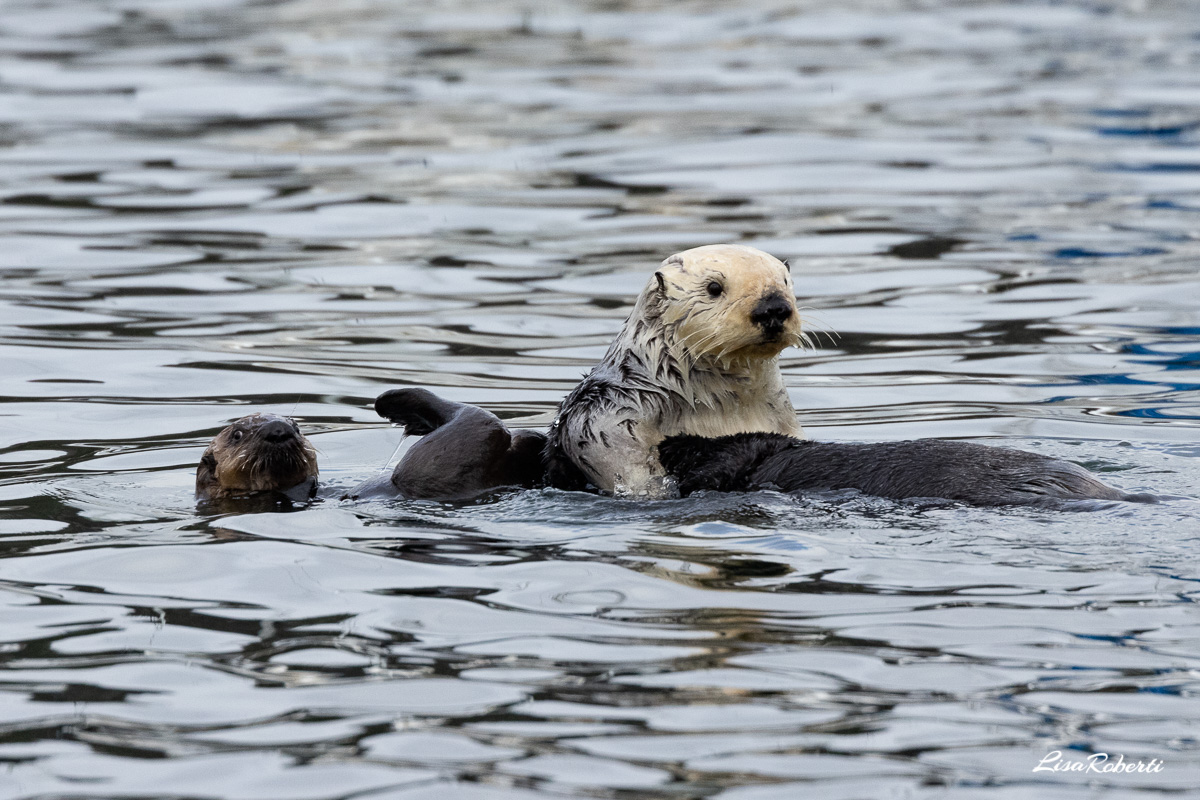 We saw some sea lions, otter, and Rizzo’s dolphins as we left Fisherman’s Wharf.

We quickly got a call that one of their other boats had found orcas hunting.   This boat had a Netflix crew on board.

Orcas come into this area during this time of year to hunt baby Gray Whales.   Gray whales migrate from Mexico to Alaska in late April and May and the orcas hunt the babies.

Gray Whale adults can reach 39 feet in length and reach about 60,000 pounds.    They calf in the Mexico warm waters and then return to Alaska in the spring and summer to feed.

Normally, they will stay in shallow water because it is safer for them.   In this case, for an unknown reason, the mama whale was in water that went to a depth of 600 feet.   A very dangerous location for the baby.

Orcas, known as killer whales, are not actually whales.   They are dolphins.   They are called killer whales because they kill whales.   Most of the sub-species of orca feed on mammals – which can include seals, sea lions, baby whales, and sharks.   The orcas known as resident orcas (found in the San Juan Islands) only feed on salmon.

It was hard to see and understand what was going on.   There were 5 pods of orcas all making the attack.    The goal of the orcas is to separate the baby from the mama and then drown it. 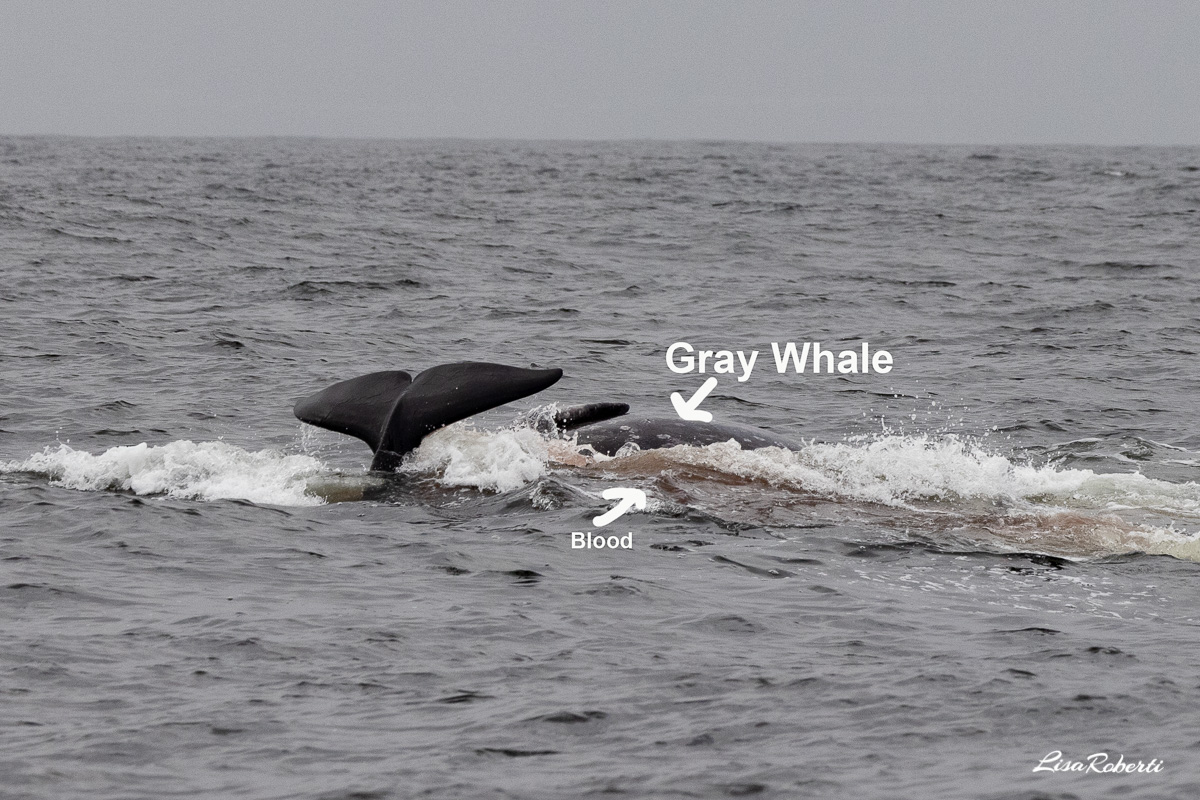 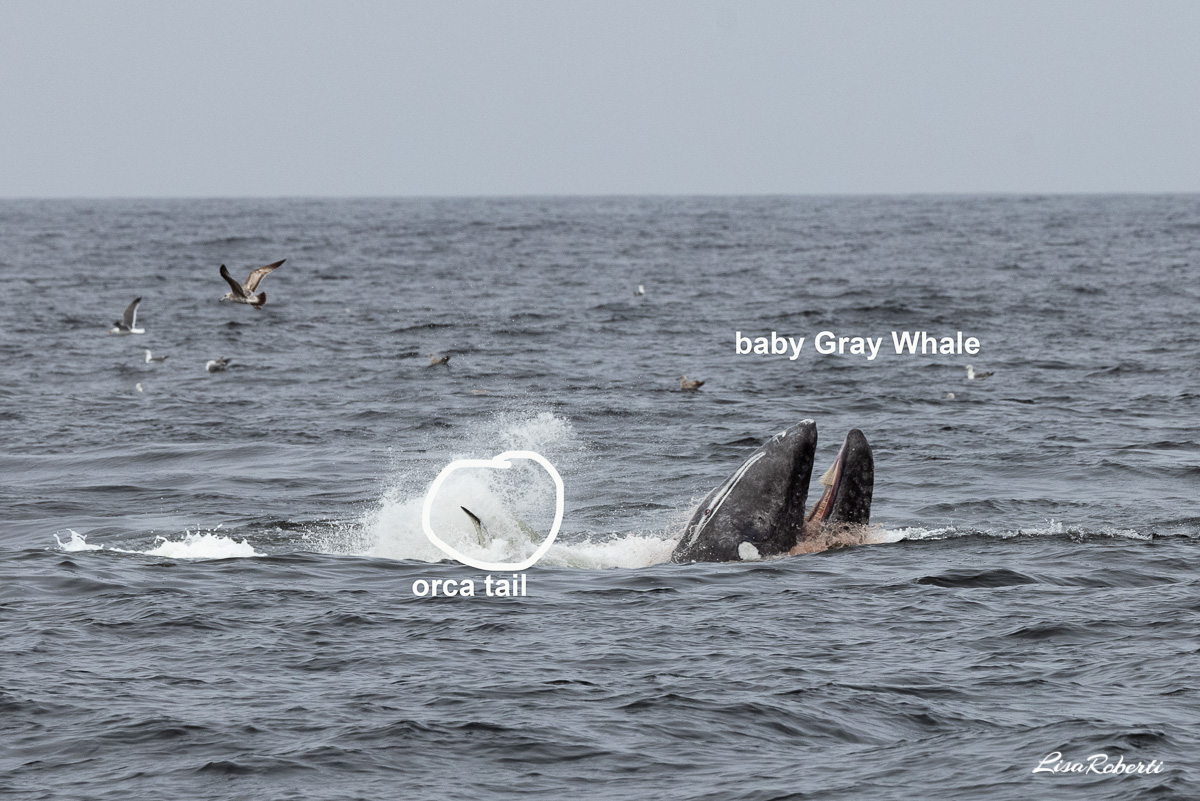 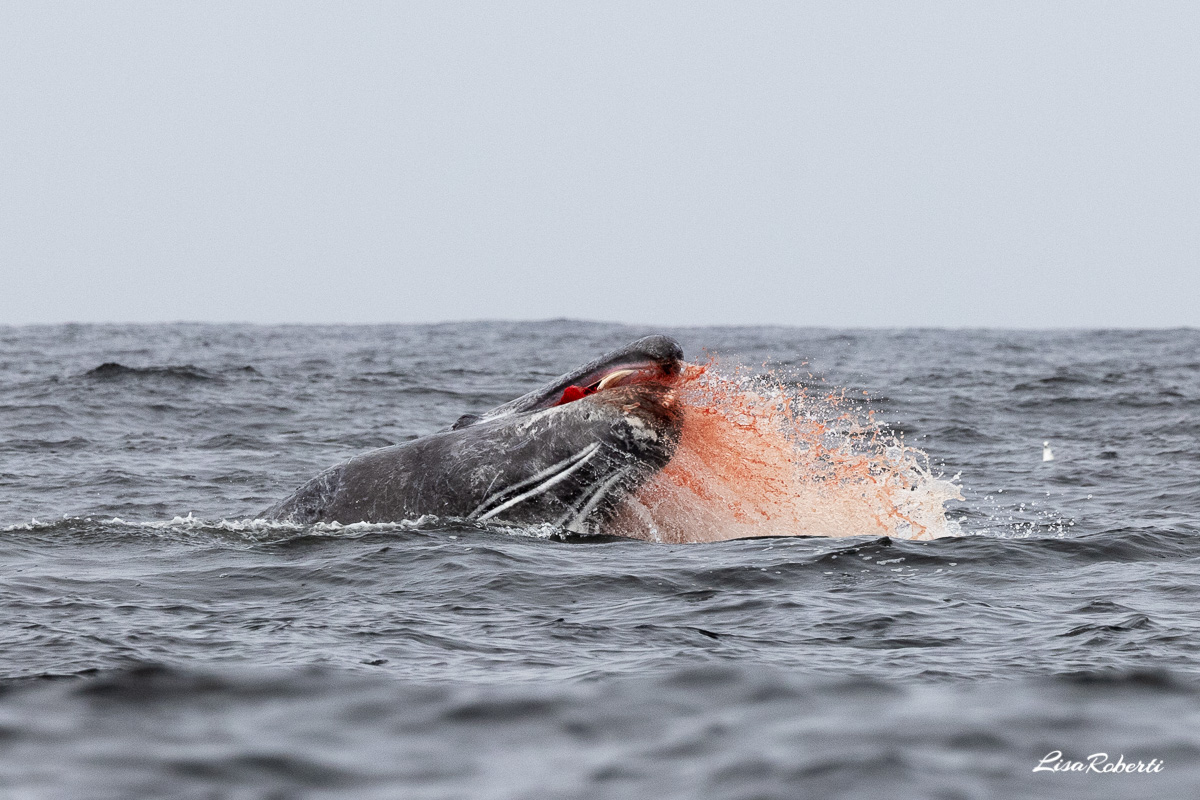 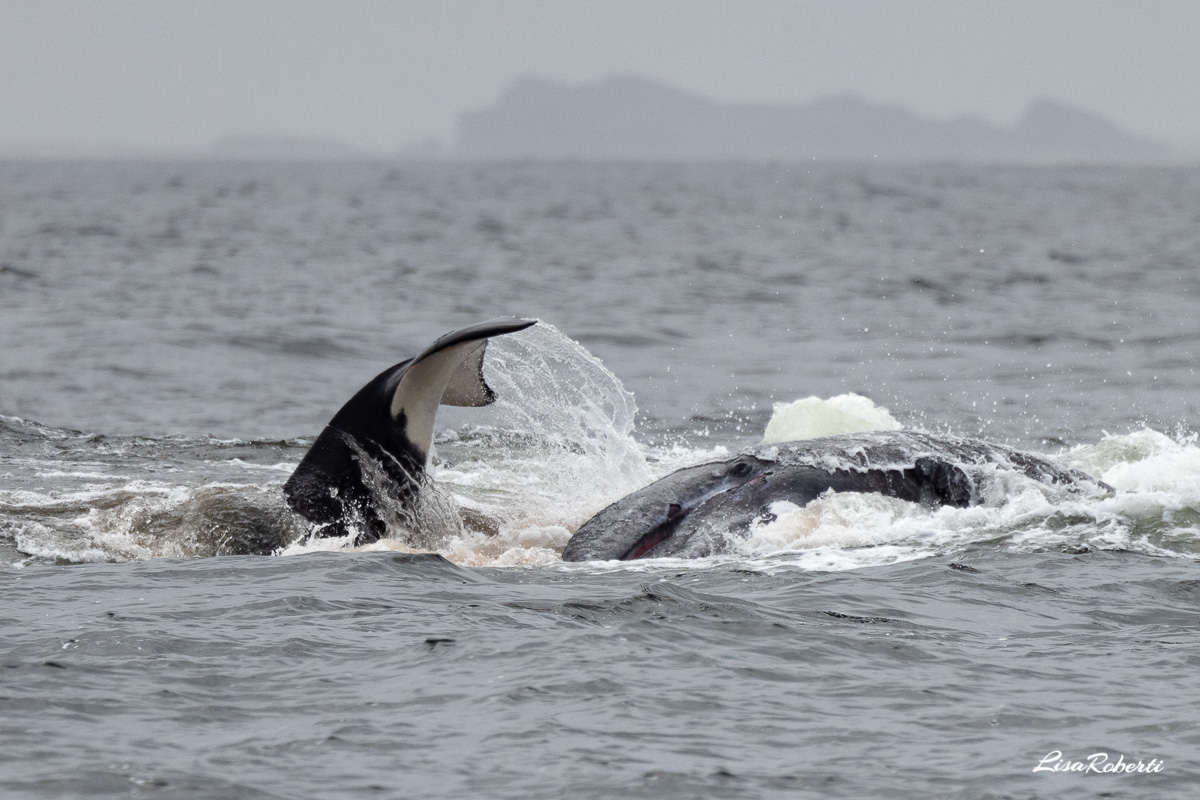 The baby Gray Whale gets on the mama’s back to stay safe.   The 5 pods of orcas took turns ramming the mother underwater.    We couldn’t really see this from the boat (later I did see some drone footage).  And it was even hard seeing and understanding what was happening at the time.

I know that in nature, one animal must die so that the predator can survive, but it is still very difficult for me to watch.   Seeing both animals fighting for survival.    It’s hard.

At least in the water, we couldn’t see the brutality of the attack.   We couldn’t hear the screams or see the panic – until looking at the pictures – when I could see the baby laying on the mama’s back with blood spewing from its mouth.

It took about 1.75 hours for the orcas to separate the baby and then drown it.   The mama Gray Whale, very beat up from the repeated attacks, swam in the area for a little while and then departed as there was nothing more she could do to save her baby.

It is not uncommon for the orcas to breach and jump (we would call it celebrate) after a kill, but these orcas did not do that.    The naturalist on the boat said it was because they didn’t want the Humpback Whales to see them.   It is a common practice for Humpback Whales to protect the Grey Whales and other mammals from attack.   Even after the baby was dead, if Humpback Whales had come into the area, they would have “saved” the deceased baby and not allowed the orcas to feed.

I am in the process of creating a narrated video of the event but it will take me a while to finish it.   It will be posted on my youtube channel when it is complete.

These two last pictures were after the Gray Whale Calf had succumbed to the attack. 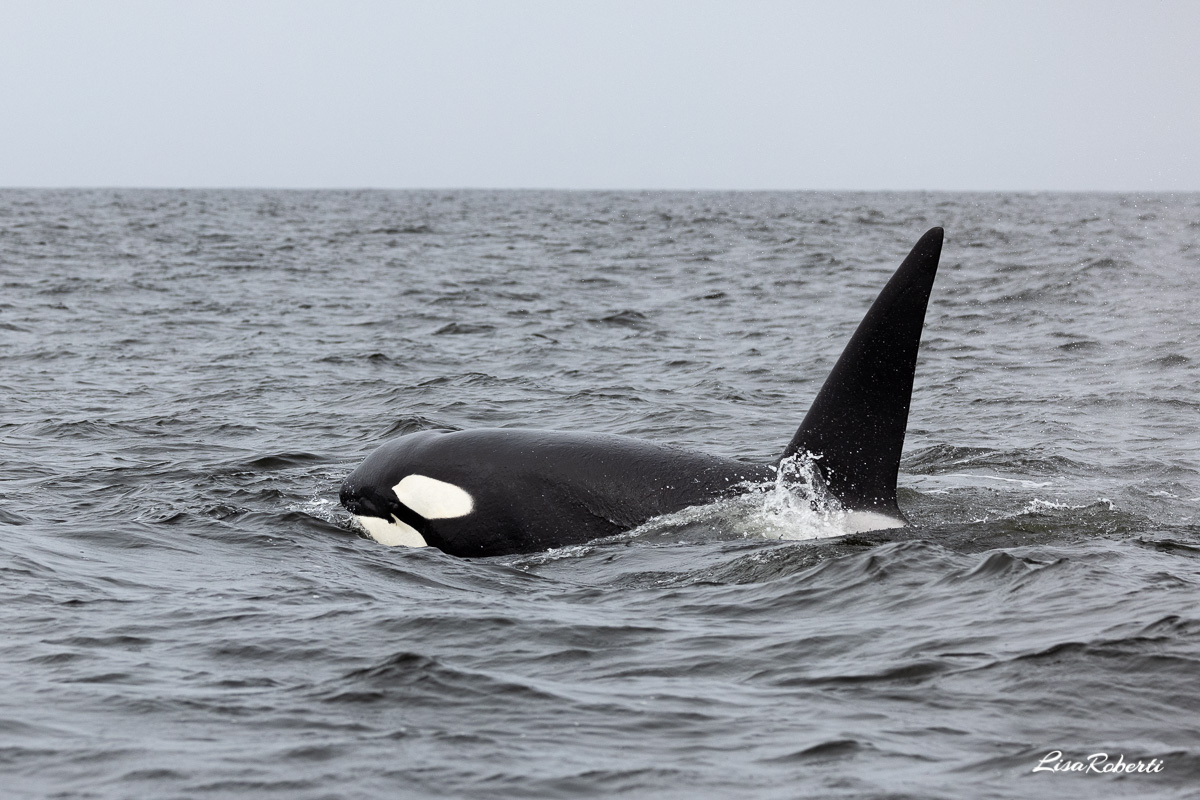 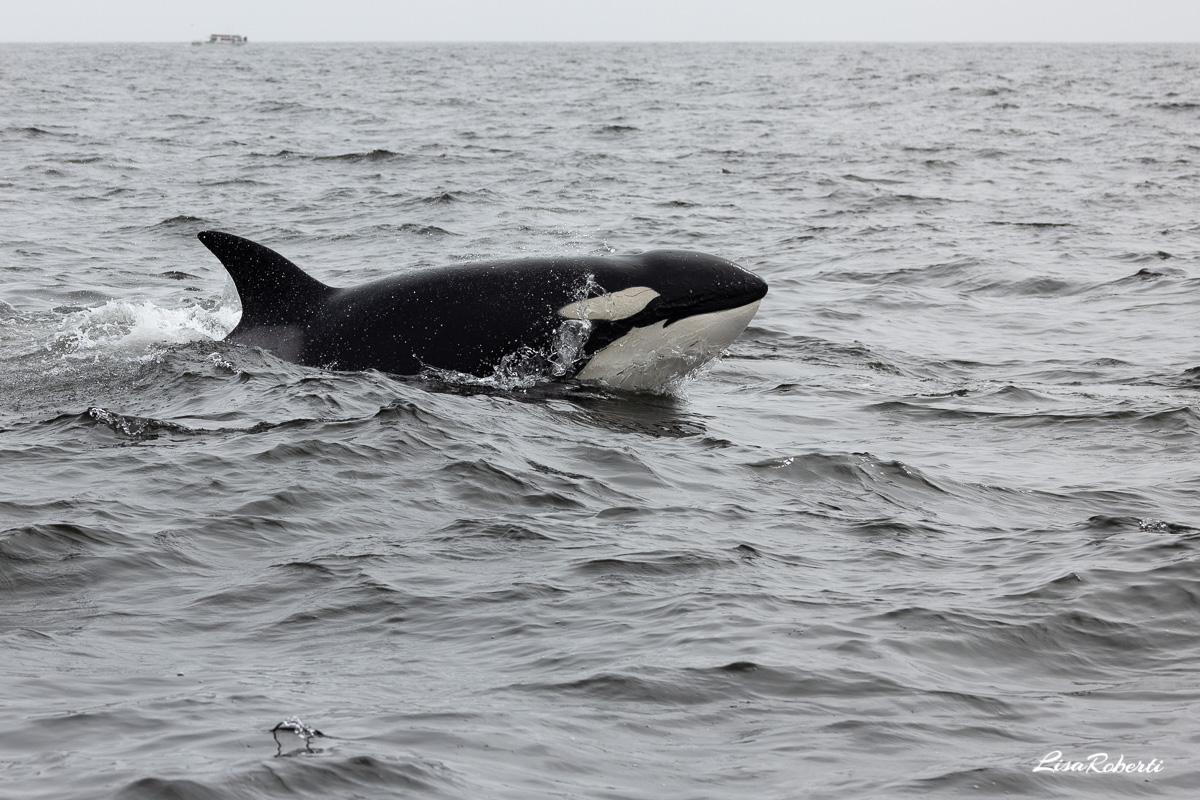 Day 4:  Orcas have a big dinner of baby Gray Whale

Not knowing how the seas would be, I medicated again the night before and in the morning.

I am not a “pill popper” and medication has a huge effect on me.  I was really feeling the fatigue from the pills.

As soon as everyone was boarded, we headed to the site of the kill from the previous day.

Several pods of orcas were in the area feeding from the baby whale carcass.   The whales will feed from the surface and will also then pull the carcass down and feed from underwater.

There was a lot of porpoising (when the whales were just swimming) and we were pretty much surrounded by whales all day.

We had some close encounters with the whales swimming under our vessel and all around.

There were 2 kayakers and it was really sad to see them chasing after the whales. 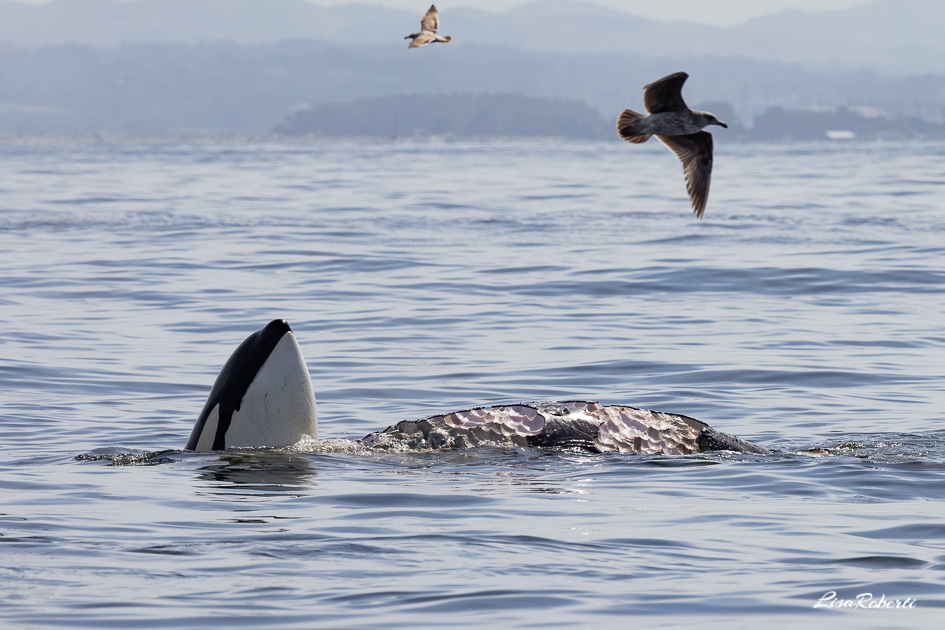 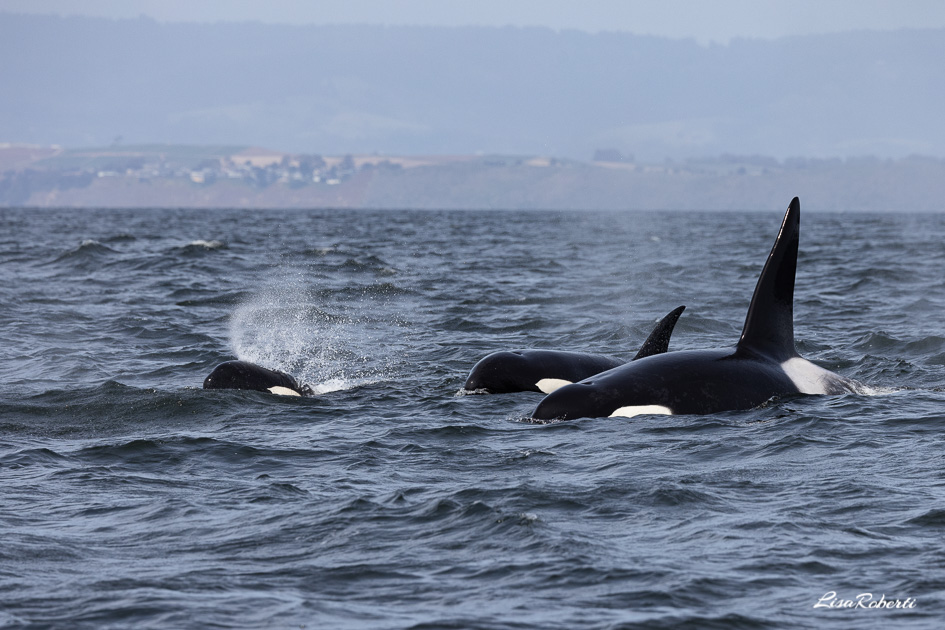 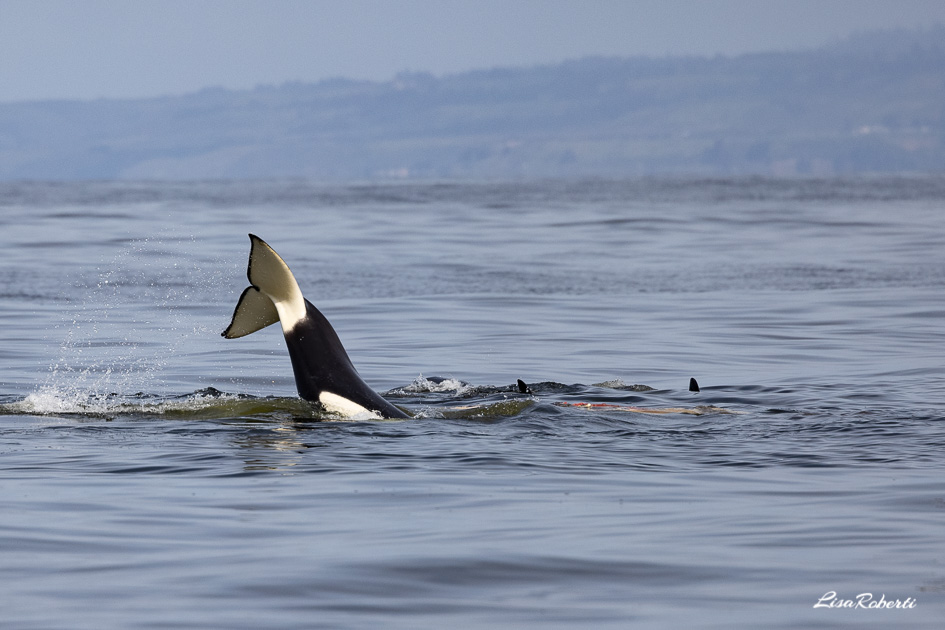 Summary of the trip

I consider this trip quite an adventure.

Due to Covid, the aquarium was closed and most of the restaurants had a wait because of the limited capacity.   The stores on Fisherman’s Wharf were open and I will admit, we visited a few of the candy shops for saltwater taffy.

I actually prefer watching Humpback Whales over Orcas.   I think they are more active and engaging to watch so I’m not sure if another trip to Monterey is in my future.

If I do ever take an opportunity to come back to Monterey, I will definitely be prepared for rough seas and I would definitely go on Monterey Eco Tours and Monterey Bay Whale Watch again.

I am creating a narrated video about the hunt and will post that to my youtube page.

I send a newsletter out one to two times per month.   Please sign up below for more information about Wildlife, Wildlife Conservation, and sustainable travel to wildlife rich areas around the world.

I would love your comments about this adventure or any questions!  Thank you.