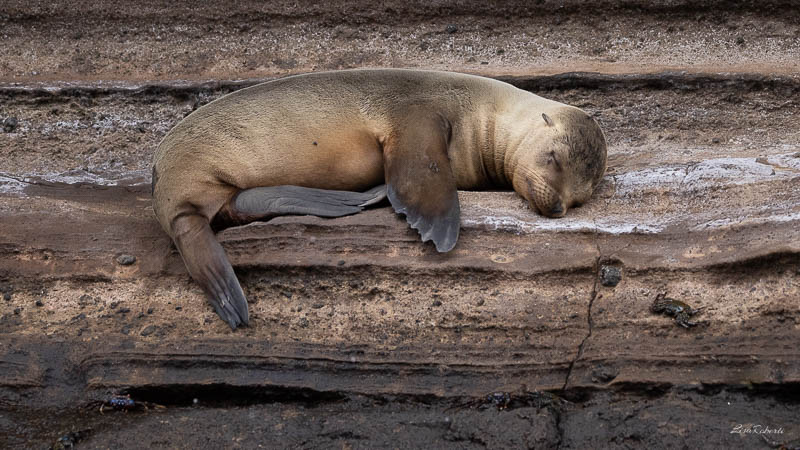 We anchored off of Punta Vicente Roca on the Isla Isabela.   At 2:00 we went out on the pangas.

We toured the cliff sides from the pangas and it was the first site of FUR SEALS!   Interesting, fur seals are actually sea lions and not seals.   They have double the amount of fur per square inch than the Galápagos sea lions. 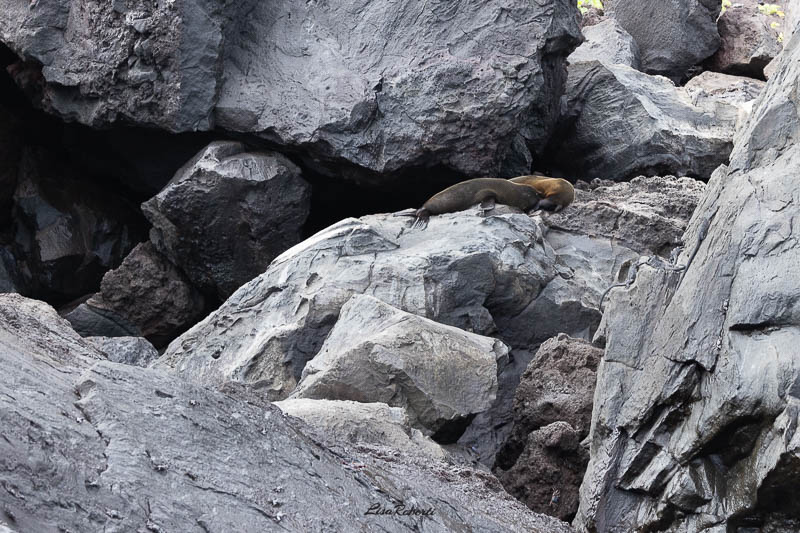 The first ones spotted were a mama and her puppy fairly high up on the rocks.

After a few minutes, we saw the mama going down the rocks towards the water.   The baby was apprehensive to follow.

(photographing from the panga had it's challenges as there were 7 of us - the panga is drifting and moving up and down with the water and trying to shoot between and over people from a moving boat was tough...so I wasn't able to get pictures for all the parts of this story.) 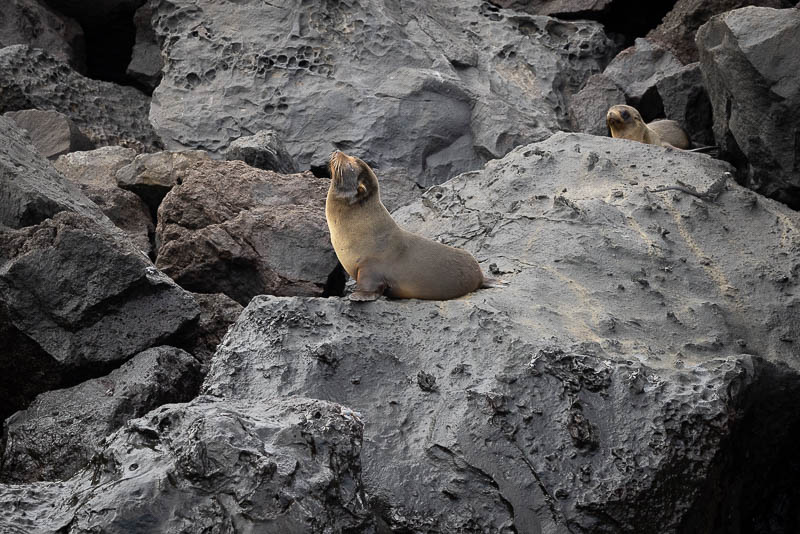 The dexterity of the sea lion to maneuver over the rocks was extraordinary. 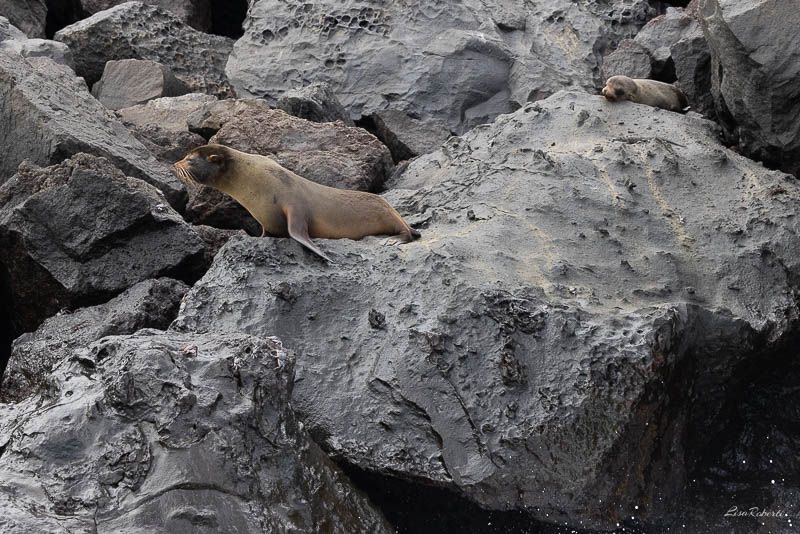 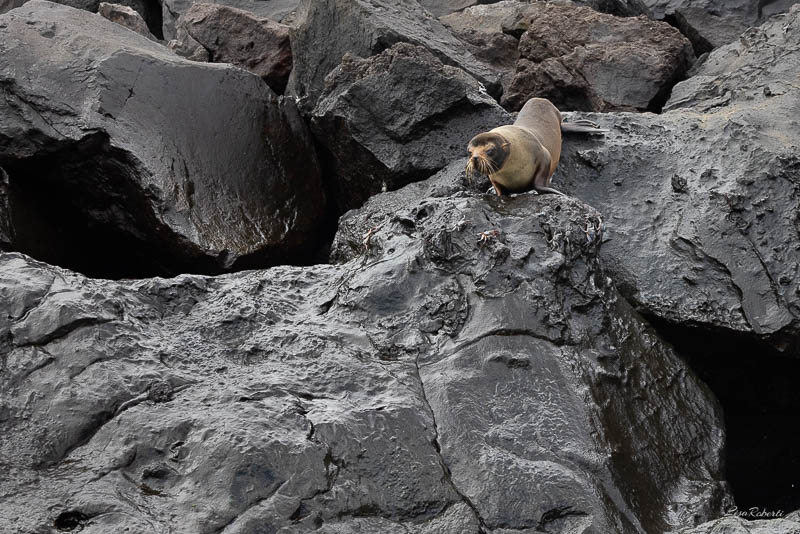 The puppy gets up courage and follows mama down to the next ledge.

mom goes down a little bit further then what's pictured below 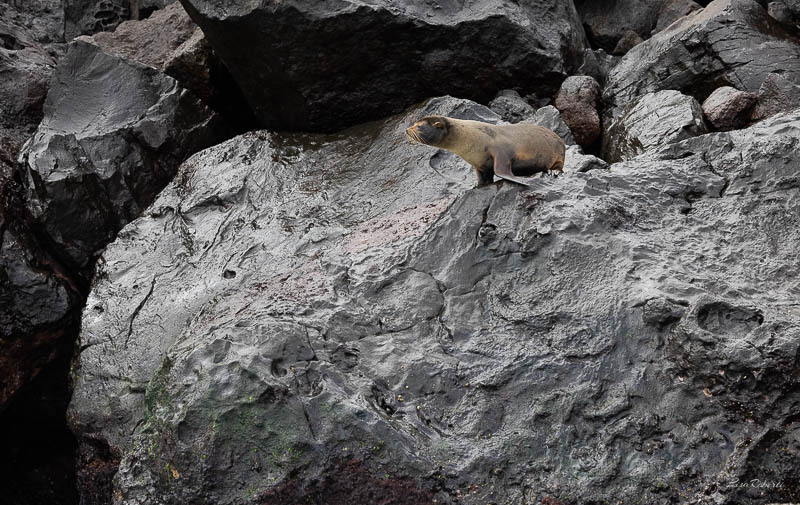 and she waits for a big wave 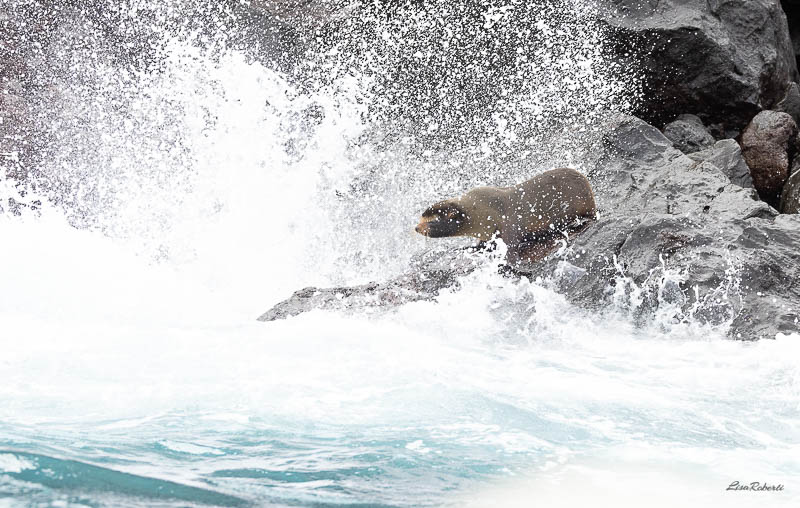 and disappears into the ocean

The scared puppy stayed on the ledge protected by the little cave. 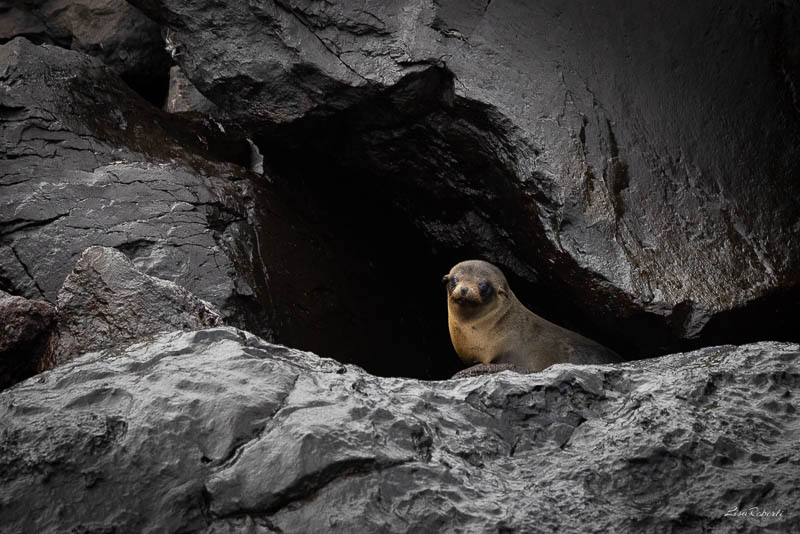 He eventually got brave and also went down towards the water until a big wave washed him away.

I saw him go into the water but couldn't get a photograph.   We did not see him meet up with mama but sea lions excel in the water so we are sure he ended up reunited with mom.

We saw more seal puppies and lots of birds on the rocks of the cliff.   Including the flightless cormorant. 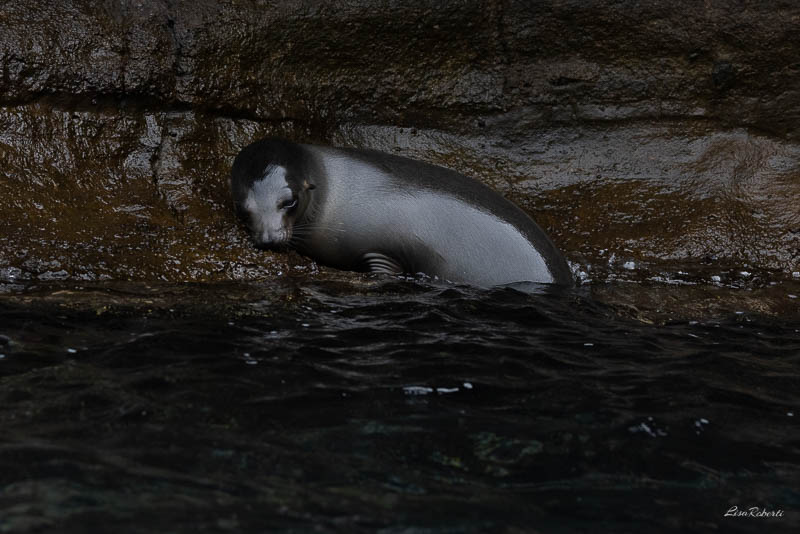 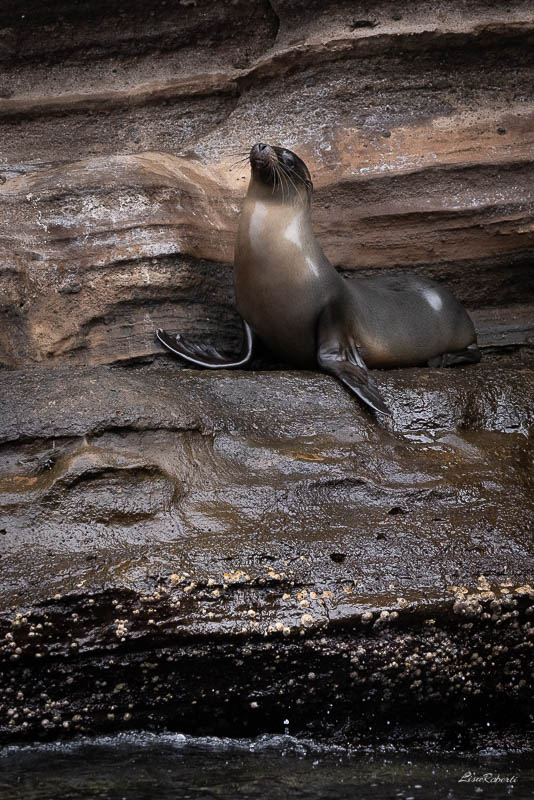 Marine iguanas also were lounging on the rocks sunbathing and we saw one penguin.   The penguin was molting and looked quite pathetic. 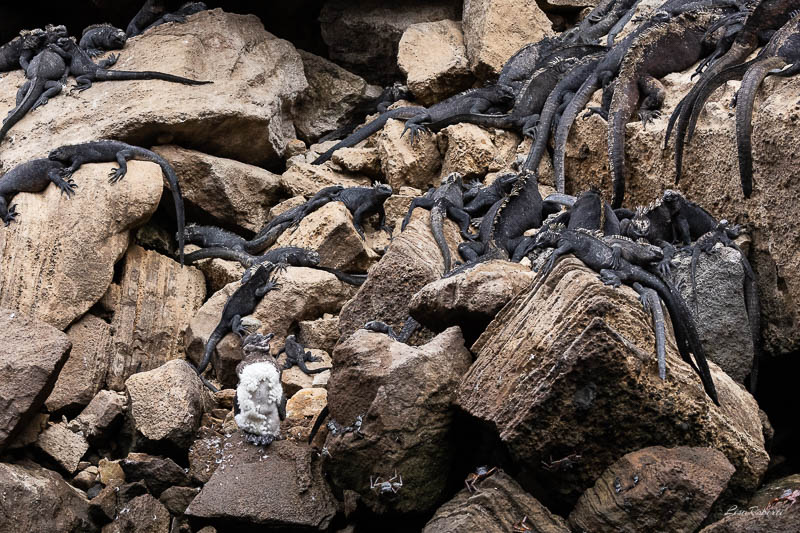 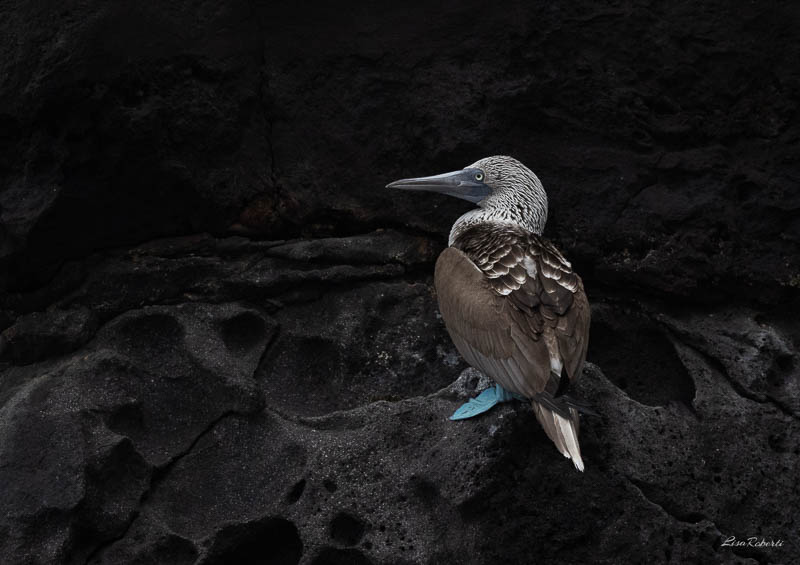 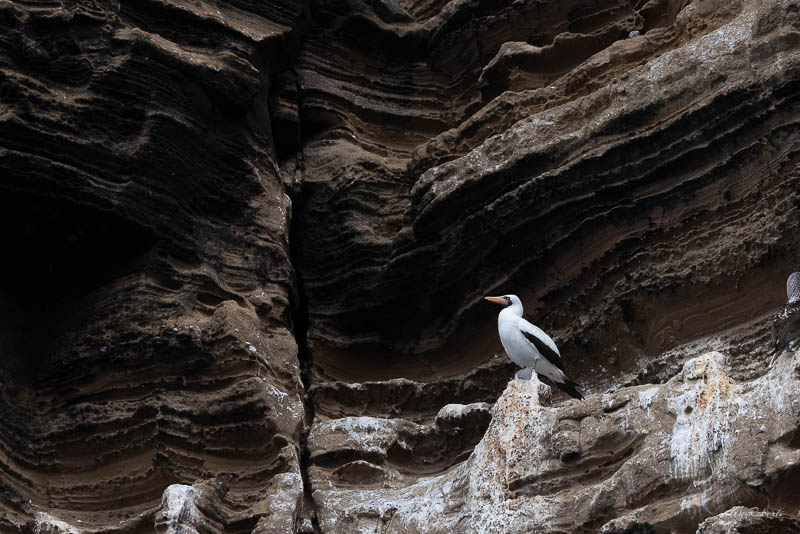 After the dinghy ride, we had a great snorkel.   My favorite one of the whole trip - why?   because there were SEA LIONS!!!   The sea lions were very inquisitive and playful.    This was the highlight of my entire trip to the Galápagos Islands.

I jokingly said that I hope I'm not mistaken for a sea lion (or a beached whale) in my wetsuit, but after watching them in the water, I realized there was no way that could happen.   The sea lions are incredibly skilled and graceful underwater.

It was like watching the best ballet or ballroom dancers on a stage.   The way they moved was mesmerizing.     I captured just a tiny bit of it in this short video below.

It was so hard to not reach out and touch him when he swam upside down in front of me.   I had one hand on the GoPro and the other hand I had holding on to the neck of my wetsuit so I wouldn't touch him - self control is not one of my strengths - but I knew it was bad for him...so I had to make sure not to reach out to touch him.

We had some time to shower and spent some time on deck with the beautiful sunset. 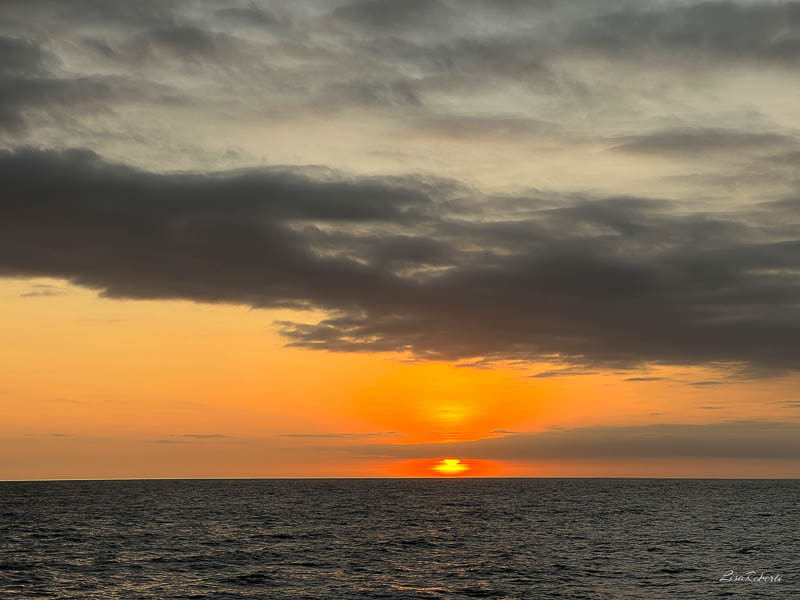 Downloaded images and then the briefing and dinner.    We didn't move until after dinner because we had to navigate around the north tip of the island.   It was a long navigation - about 9 hours and they warned us there would be 2-3 meter waves.

I was safely flat on my back in bed before the waves hit and it got very rocky and stuff I could hear stuff falling over from the motion.  So grateful we were moving thru the waves while it was night time!

To seem more pictures from the Galapagos Islands and my other travels, go my my travel photo gallery.

If you enjoy the articles, images, and videos, then please join my newsletter.   I send the letter out periodically through the year when I have great stories or information to share.